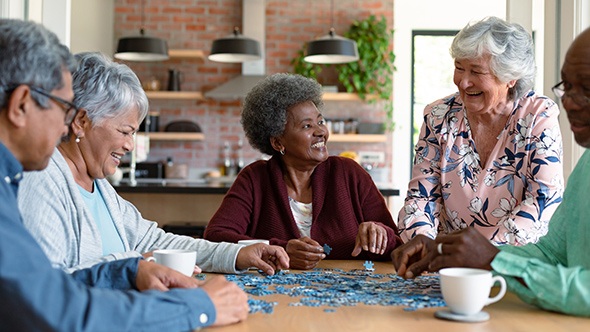 In this section, we will give you some food for thought that will help you to thrive in your senior years. When you read it, you will understand that to be a senior is certainly not to passively resign yourself to endure the burden of aging while waiting for death to arrive. On the contrary, seniors are called upon to play a unique and irreplaceable role in society and in the Church.

It is a role that is up to you to discover and to live fully!

In a family, to be the elder is to be the first born child in a family with several children.  It is a title - that comes with responsibilities – which is a given: it is natural and legitimate.

That being said, can we become an elder?  In a family, it is simple:  we either are or are not the eldest child.  In society, on the other hand, we become an elder – a senior – over the course of the years, whether we want to or not.  In the two cases, the terminology is similar, but the meaning is altogether different.  But then, in society, when do we become a senior?  When do we inherit this particular social status?  Do we become a senior when we reach the age of retirement?  Or when we begin to receive QPP benefits at the age of 65?  What about those who begin to receive their benefits when they are 60 years old?  Are they considered seniors before others?  Do we become a senior when certain physical limitations affect us?  Or when we become a grandparent?

As we can see, the term “senior” is quite flexible.  In order to define it, many factors must be considered: age, retirement, life experience, a certain wisdom, being a grandparent, physical limitations, etc.

The challenges of retirement

Let us take a moment to consider retirement.  It begins the moment a person decides to take the exit ramp and leave the workforce.  For many people, it is a long-awaited freedom: the end of all sorts of constraints, pressures, performance, and tasks that have become routine chores.  Retiring marks the end of many things that were more or less enjoyable.

But this freedom also has a flip side: a person might mourn a familiar place where so much time was spent, a structured routine and relationships which marked a person’s daily life over so many years, sometimes decades.  The measure of time shifts: some might have the impression that they have so much time on their hands, while at the same time having the impression that time is quickly slipping through their fingers.  The notion of time might even become muddled in one’s memories…

Retiring is to enter into the “golden age”, allowing one to hope in a bit of escapism and dreams, or at least a time when one can finally do “what I want, when I want”, with respect to one’s limits (notably financial limits).

For many, paid time finally makes room for time… given:  volunteer work.  It becomes a wonderful opportunity to take stock of one’s talents and to put them to good use in the service of a variety of work.

These beautiful years will provide many opportunities to flourish and occasions for healthy self-realization.  Nevertheless, several factors will have an important impact on the quality of these years: being single or married, widowed or not, overall health.  For example, confronting life’s trials – such as loss – in solitude or in agreeable company, changes everything.

In any event, the years of this golden age, if one wants them to fulfill their potential, must be lived in a positive way: not as a time to simply eliminate old frustrations related to the workforce, but as an opportunity to serve society by offering the best of oneself, in a spirit of detached self-giving.  It is by adopting this type of spirit and attitude that this golden age will live up to its potential.

Grandparents: Witnesses of God’s presence and guardians of memory

This irreplaceable role of grandparents supports the role of the parents, which they should not replace or even oppose (except in case of grave necessity). Parents (Christian or not) always bear the primary responsibility for their children’s education. This being said, if parents have not handed down to them the basics of Catholic faith, grandparents have a duty in conscience to assume this responsibility, with tact and great wisdom.

Grandparents are the guardians of memory: first, the memory of faith, religious rites, Christian moral values that gave them life and that they want to hand down to their grandchildren; they also are the living memory of the family, its origins and roots. Even from birth, grandchildren receive from them, bit by bit, the fascinating account of their history, which gradually becomes part of their own history, which in turn becomes full of life and hope, an identity benchmark for the rest of their lives. As they hand down their memory, grandparents also give their grandchildren the keys to build their future.

Handing down a way of Christian life

Grandparents, through their faith, have the mission to be the look of Christ to their grandchildren—a meek and welcoming, understanding and merciful look, full of hope in the future; in short, a look that supports and soothes them, builds them up, and gives them impetus and strength.

Inspired by the example of Mary and Joseph, role models of all parents, grandparents are able to listen to their grandchildren: they receive confidences with kindness, share joys and sorrows, nurse wounds, alleviate life crises, give advice, and get grandchildren back on their feet.

The grandparents’ home is not only the place for memory, but most importantly a place to find rest, comfort and new strength.

Handing down a look of love and compassion on the world

Grandparents’ great life experience has taught them to refrain from judging people; rather, they seek “God’s hidden image” in each person. This look seeks to find beauty rather than ugliness, good rather than evil. This look of wisdom and love, this serene look on the world, is what grandparents want to hand down to their grandchildren.

Grandparents, who embrace God’s look on the world, know that it is beautiful, that people deserve to be encouraged in their efforts and deserve a second chance after failure. They prefer to build up rather than put down.

Christian grandparents have understood that although Christians live in the world, they do not have to adopt all its ways of thinking and living; one must use discernment. Rather than emphasizing values of consumption, performance, and speed, they choose to go against the trend: what must come first is being: the person, the quality of the bonds that unite us to each other.

Christian grandparents dwell in the world with love and compassion; this is the attitude they want to hand down to their grandchildren.

Handing down love for prayer

Christian grandparents know how prayer has paramount importance if one is to have a privileged relationship with God. Many of them know very well the traditional Catholic prayers they learned by heart as children, but they also know that the important thing is not to recite them mechanically (as if they were magical formulas), but rather to pour them out from the heart.

Christian grandparents, because they care for the spiritual growth of their grandchildren, find it natural to pray with them. If grandchildren’s religious formation is totally lacking or minimal, they can undertake it themselves, with great prudence and tactfulness—without going (too much) against the parents. Thus, grandparents can teach their grandchildren in their very earliest years how to thank God for everything beautiful, to ask for forgiveness for their little tantrums or to say please for a little favour they ask from Heaven. Over the years, these little prayers will develop their intimacy with God into a very strong bond with Him—the most precious bond that could ever be.

Grandparents will be the companions and teachers of this daily breathing of prayer, as models of steadfastness. Prayer will be a bond of hearts between grandparents’ and grandchildren’s souls, thus creating unique spiritual links.

The home of the grandparents will be for their grandchildren a school of prayer where the only true God will be recognized and worshipped.

Handing down the knowledge of the Catholic practice of faith

In these times when few adults/parents go to church, Christian grandparents often stand as the only link with Sunday (parish) practice. Thus, through their practice, they witness to the importance of religious practice at church and in the Church (in a community that is mysteriously connected to all the others).

As a natural extension of the Christian formation given to their grandchildren in their home, with the agreement of the parents (or, in case of refusal, using great discretion and prudence and as far as possible), grandparents will teach their grandchildren the regular Church practices of the Catholic faith : sacraments and rituals, the important liturgical feasts of the year, the different ceremonies. All this formation will be centered on the essential presence at the Sunday Eucharist, the SACRED HOUR of the week for any Christian, from which everything flows.

As far as the parents allow it, grandparents will take part in the formation and celebration of their grandchildren’s high points, which are the sacraments of Christian initiation: baptism, first Communion (to which reconciliation is linked) and confirmation. Throughout their Christian formation, grandparents will remind them of the graces and obligations of their baptism, the abiding beauty of their Christian identity and the spiritual and moral values from it, and of the importance of parish life and fraternity.

Through this daily formation and accompaniment, their grandparents’ parish church will gradually become for the grandchildren not a mysterious and anonymous place, but the place where the Living Christ is present among His people, a warm place where they will feel at home, where their faith will take shape and learn to use “its hands.” To sum up, it will become the Church of Jesus, the Christ, THEIR Lord.

Handing down the meaning of life

Ultimately, the grandparents’ most beautiful role consists of showing their grandchildren that life has a meaning that is summed up in a Name: Jesus, Revealer of God the Father in the Spirit, who gives us His Divine Life (through the sacraments received in His Church, which gathers all the Father’s children).  It is this meaning, this gift from God, that makes life beautiful.

Through their faithful, bright witness of Christian life when their physical life and forces wane, disease strikes them and death comes near (or takes them), grandparents will hand down to their grandchildren the fundamental certainty given by faith: God is always there, He will accompany them faithfully at every stage of their lives, up to death, because GOD IS LOVE! Later, when they themselves grow old, their grandchildren will remember the lesson received from their grandparents: it is good to walk with God and go towards Him with full confidence and serenity!

What a wonderful task and responsibility to spread seeds of faith and eternal life in the hearts of grandchildren! Thank you, Lord, for this sublime mission You entrust to all grandparents in the whole world. Inspire and support them through your Spirit!