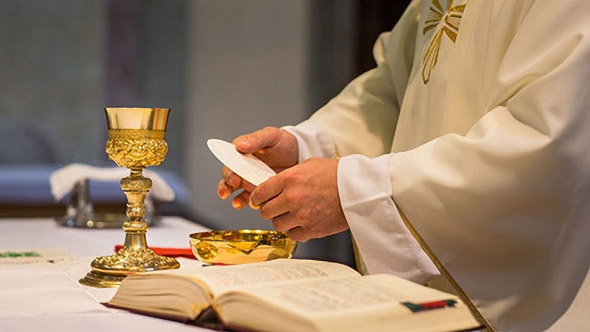 The Mass or Celebration of the Holy Eucharist is the central liturgical ritual in the Catholic Church where the Eucharist (Communion) is consecrated. It is the source and summit of the Christian life. Through consecration by a priest the sacrificial bread and wine become the body and blood of Christ. For more information, either liturgical or pastoral, do not hesitate to contact us: LD_ServiceDePastoraleLiturgique@diocesemontreal.org

" Prayers of preparation and thanksgiving!"

According to the common conception, we are living in an age in which the values of human dignity and equality are strongly upheld. And that is a fact. There is, however, one type of event that particularly stands out for the keen observer: a visit from a king or queen or a meeting with a head of state! We do not meet such persons at just any time or in just any fashion. When standing before them, a certain posture is required. The protocol in their presence is meticulously set out beforehand. The words to be used in addressing them are carefully prepared and polished. In short, one wishes to avoid giving the least offence to the guest. And if that should happen, it would set a precedent, and perhaps an irreparable one. Thus we are well advised to be well prepared and to anticipate every eventuality.

If such precautions are to be taken respecting beings of flesh and blood, how much more should they be observed by Christians, above all when they are conscious of being in the presence of the One who gives them their being and their ability to move, of this God who calls us to celebrate the covenant of our salvation, whose memory is being perpetuated here and now by Christ in and through his Church. This point has been well understood by those who minister to our souls.

The Eucharist is the greatest of all appointments. It is the highest point of Christian life and the source of countless graces. To live it and take part in it in the most fruitful manner, we must be well prepared. This is the purpose of these prayers, which are offered here to all those involved in the liturgy and to the whole Church at prayer across the diversity of all her members. Ordained ministers and lay people who exercise any type of ministry in the Church, as well as the faithful who participate in the liturgy - all are called to prepare themselves in order to participate worthily and productively in the Banquet of Grace.

Some splendid prayers of extraordinary beauty and depth are at our disposal through the Resources tab on the Liturgy website of the Diocese. Drawn from the Church’s living tradition, they will assist us in developing the most favourable inner disposition so that each Eucharist lived with the Lord will be a full and enriching experience.

It is not enough simply to prepare oneself. It is also important, after having shared the Holy Body and the Precious Blood, respectively delivered and poured out for the salvation of the world, to consider the meaning of such a great gesture of love which is made and renewed at each Eucharist. When we contemplate how great this Love is which is given up for us, we can only admire and give thanks.  Prayers of thanksgiving are also presented in this same document. We can practise these prayers and use them to gather the spiritual fruits of partaking in the Eucharist, saying in all truth with Saint Paul: "It is no longer I who live, but it is Christ who lives in me." In doing so, we become women and men of the liturgy!

New Translation of the Roman Missal, soon to be available!

Initially announced for Advent 2020, publication of the new French translation of the Roman Missal was obliged to be delayed. Reliable sources, however, have recently passed on promising news: the new translation will be released at the beginning of the last quarter of 2021, at the start of a new liturgical year.

As we emerge, albeit timidly, from the coronavirus pandemic which has run amok for nearly two years and as we begin to return gradually to our parishes to take part in the Banquet of Grace, many of the faithful in our Archdiocese have been ceaselessly wondering: ‘‘When will the new French translation of the Roman Missal be published?’’

As you know, the new translation is the happy fruit of a labour first undertaken long ago. This translation work was based on the third typical edition promulgated in 2002 by Pope John Paul II. Another printing of the same typical edition was released in 2008. The text has since been revised again with a view to observing the threefold fidelity invoked by the Supreme Pontiff: fidelity to the original Latin text, fidelity to the character of the vernacular and fidelity to the intelligibility of the text as prayed by the faithful. Result: The new translation of the Missal will be published in October 2021 and will be available by Advent 2021.

On that occasion, Liturgy Services will offer you a range of activities and tools to help you: to discover the innovations featured in this translation, to understand the rationale behind the choices adopted and proposed for use by and in the Church, and to identify their meaning in relation to the Church's understanding of the liturgy. What an excellent way for all of us to renew our faith, to participate in the building-up of this Body in which the mystery of God Himself is unveiled as Word and Bread of Life, to enter into the wisdom of the liturgy and, for the glory of God and the happiness of his faithful, to develop the Ars celebrandi (the Art of celebrating).

Before the new translation of the Roman Missal arrives in our hands, the magazine Vivre et Célébrer invites us in their upcoming issue to be published towards the end of the summer, to discover the riches of this prayer book. Here are some websites and books that may help you get involved in the process:

Implementation of the new phrasing of Our Father (in French)

At the annual meeting of the French Sector in September 2018, the Catholic Bishops of Canada of the Latin Rite decided that, as of the first Sunday of Advent (2 December 2018), the new French translation of the Our Father will officially replace the old version in all its public liturgical form. More specifically, the wording "Ne nous laisse pas entrer en tentation", will replace the current text "Ne nous soumets pas à la tentation" which has been in use across Canada since 1966.

Mention of Saint Joseph in the Eucharistic Prayers

Following the Decree of the Congregation for Divine Worship and the Discipline of the Sacraments, for the mention of the name of Saint Joseph in the Eucharistic prayers II, III, IV of the Roman Missal, it would be important to write, in ink, in all the Roman Missals, used for the celebration of Mass, private or public, the words which are here in bold:

In Eucharistic Prayer II: “that with the Blessed Virgin Mary, Mother of God, with blessed Joseph, her Spouse, with the blessed Apostles…” ;

In Eucharistic Prayer III: “with the most Blessed Virgin Mary, Mother of God, with blessed Joseph, her Spouse, with your blessed Apostles and glorious Martyrs…”;

In Eucharistic Prayer IV: “with the Blessed Virgin Mary, Mother of God, with blessed Joseph, her Spouse, and with your Apostles…”.

Read the declaration from the Vatican

Every liturgical year (A, B or C), the diocese of Montreal organizes an evening in preparation for each of the important celebrations of the liturgical year, the Christmas Mystery and the Paschal Mystery, for all those involved in the liturgical life of their parishes.

Liturgy Services’ monthly newsletter, formerly ‘L'Acolyte‘, has a new name: Synaxis. The publication, addressed primarily to members of parish liturgical committees, wishes to welcome the collaboration of all who contribute to the mission of the People of God.

In our role as a Catholic Christian community engaged in the mission, we hope by means of this publication to respond to the greater part of the spiritual needs felt within the Church of Montreal and elsewhere.

August 12, 2021
Instructions for the purchase of Mass wine

Mass wine -  List of products authorized by the Archdiocese of Montreal