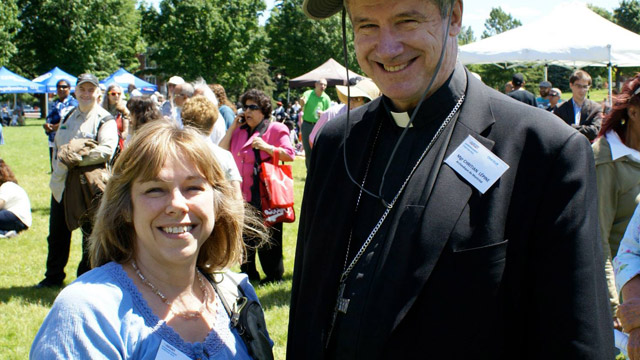 200 Million Christians Deprived of the Freedom to Live their Faith

At this moment, 75% of religiously motivated violence in the world is directed at Christians. Most Reverend Christian Lépine, Archbishop of Montreal, returned from a trip to Rome where he attended the meeting, as a new member, of the International Board of Directors of Aid to the Church in Need (ACN), a pontifical foundation that provides assistance to Catholics where the Church is suffering from poverty and persecution.

"This meeting was an opportunity to become aware of the situation of Christians around the world and to maintain ACN's mission of providing Christians with assistance, wherever they are," stated Most Reverend Lépine.

Aid to the Church in Need was founded in 1947 at the Abbey of Tongerlo, in Belgium. Its founder, Father Werenfried van Straaten, launched an aid movement in favour of the 14 million expellees in Eastern Germany. The Archbishop said, "In the beginning, ACN's mission was to help churches that were being persecuted, but with time, it expanded to include any church that is in poverty."

The Archbishop of Montreal is delighted to be associated with this charitable work: "Montreal is ACN's Canadian national office, so our ties are continually getting stronger. One thing leading to another, we do things, we meet, we pray, and we'll see where this will lead us. But I would say that what is most important, is to remember that there are Christians being persecuted throughout the world. We forget so easily."

Interviewed during the Christian Gathering held in Montreal on June 20, 2015, Marie-Claude Lalonde, National Director of Aid to the Church in Need Canada, was straightforward in her remarks: "200 million Christians cannot live their faith with ease - that's huge. The scope of the problem ranges from those who are experiencing administrative difficulties to those who are paying with their lives. Some countries are more unprincipled than others. This year, we have been particularly concerned about the Middle East, with the arrival of the Islamic State group."

Marie-Claude Lalonde added, "In Quebec, the situation is becoming increasingly uncomfortable. Mostly, we are experiencing administrative problems. We are not being persecuted as such, but it has become difficult for us to assert ourselves, and we are made to feel uncomfortable, because it is preferred that public spaces be void of religion. This applies not only to Christians; here, every religion is expected to remain invisible. I feel this discomfort, as does everyone."