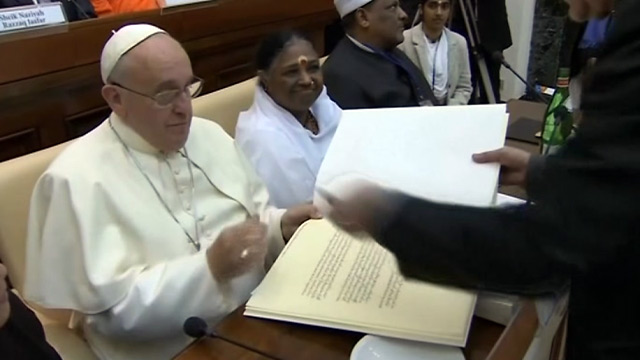 (Vatican Radio) An unprecedented gathering of religious leaders from all corners of the globe took place in the Vatican on Tuesday for the signing of a joint declaration against modern slavery.

Pope Francis joined Anglican, Orthodox, Jewish, Shia and Sunni Muslim, Hindu and Buddhist representatives in the Pontifical Academy of Sciences, together with two young trafficking victims from Mexico and Ghana.

No one knows the exact number of men and women, boys and girls who are trafficked into prostitution, forced labour or the trade in human body parts. Some estimates put the figure as high as 35 million, but as one participant pointed out, it's not the numbers that matter as much as the fact that every single one of those people could be your brother or sister, my son or daughter.

When the Archbishop of Canterbury Justin Welby first met Pope Francis in 2013, they identified the scourge of human trafficking as one of the most urgent priorities for both of their Churches today. Less than a year later, the ecumenical Global Freedom Network was set up to try and harness the commitment of believers around the world for practical action to eradicate this modern slavery by the year 2020.

This gathering of religious leaders in the Vatican today represents around 90 percent of the world's population and the declaration they signed commits their communities to working together for the freedom of all people and an end to this lucrative trade in human life. In his words to the group, Pope Francis called it an absurd evil and a crime against humanity....

This crime, the Pope said, is often hidden behind closed doors, on the streets, in the factories, fields or fishing boats where people are forced to work in dirty, dangerous and degrading conditions.....

It is the poor and most vulnerable, he said, who are usually the victims of this crime and it's a problem which is growing day by day. That's why these leaders of all different faith communities came to the Vatican on the International Day for the Abolition of Slavery, to commit their spiritual and practical support to this cause. As the declaration says, we already have the awareness, wisdom and technology to stamp out this crime. This extraordinary gathering of so many faith leaders here today marks a significant step towards achieving that goal.

Please see below the Joint Declaration of Religious Leaders against Modern Slavery:

"We, the undersigned, are gathered here today for a historic initiative to inspire spiritual and practical action by all global faiths and people of good will everywhere to eradicate modern slavery across the world by 2020 and for all time.

In the eyes of God*, each human being is a free person, whether girl, boy, woman or man, and is destined to exist for the good of all in equality and fraternity. Modern slavery, in terms of human trafficking, forced labour and prostitution, organ trafficking, and any relationship that fails to respect the fundamental conviction that all people are equal and have the same freedom and dignity, is a crime against humanity.

We pledge ourselves here today to do all in our power, within our faith communities and beyond, to work together for the freedom of all those who are enslaved and trafficked so that their future may be restored. Today we have the opportunity, awareness, wisdom, innovation and technology to achieve this human and moral imperative."