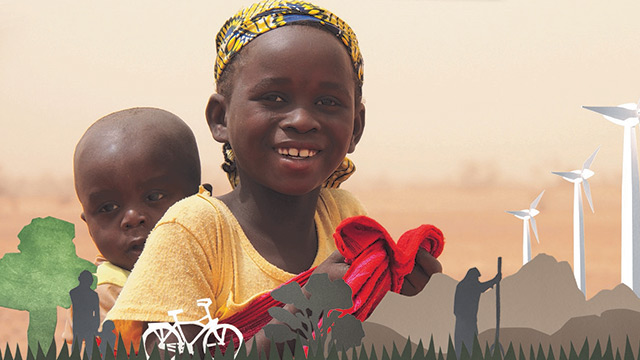 Development and Peace recently launched its "Create a Climate of Change" campaign to draw attention to the devastating effects of climate change on the poorest countries in the world.

Development and Peace is hard at work in several developing countries such as Ethiopia, Honduras, and the Philippines. Although they contribute very little to climate change and are not as well equipped to deal with catastrophes as in the Global North, these countries are experiencing drought, typhoons, and other extreme weather events caused by rising temperatures. The effects of climate change mainly affect the most impoverished.

Knowing that Canada is one of the top greenhouse gas (GHG) emitters in the world, the campaign is calling on Canadians to stand up and take action daily to reduce their GHG emissions. It is also challenging the government of Canada to establish ambitious targets for the reduction of these emissions by supporting an energy transition that will break our dependence on fossil fuels (petroleum, coal, natural gas). Development and Peace is asking the Prime Minister to sign an accord that is fair and legally binding at the United Nations Climate Change Conference (COP21), which will be held in Paris from November 30 to December 11.

"The amount of greenhouse gas emitted per person in Canada is 150 times greater than in Ethiopia, yet the most vulnerable in Ethiopia are the ones who are suffering the brunt of the effects. Is this fair? Canada has an important role to play in the fight to keep the earth's temperature below levels that will cause more disasters," declared David Leduc, Executive Director of Development and Peace.

Pope Francis' encyclical, Laudato Si, calls for urgent action to counter climate change. As part of this new campaign, several activities will be organized in schools, parishes, and communities, including vigils that will take place throughout the month of November. Preparations for COP21, which begins November 30, will also be underway. Furthermore, in December, a delegation from Development and Pease will participate in the Catholic pilgrimage to Paris for COP21.