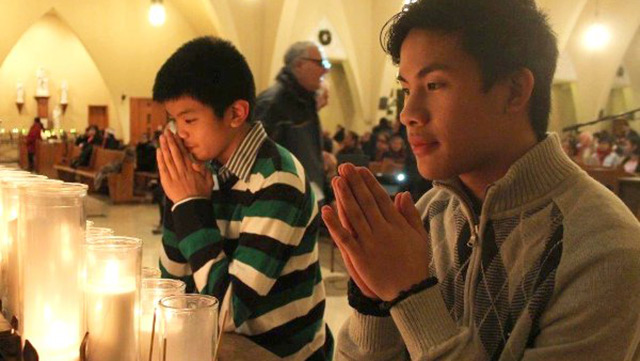 (VMO) Michael Monzon and Angelo Reyes, choristers at St. Kevin’s Parish, knelt in prayer before the crèche at their church this week as the Filippino community in three parishes in Montreal began their traditional Christmas novena.

St. Kevin's in Cote des Neiges, the Filippino Catholic Mission, Notre Dame des Philippines at 8500 St. Lawrence Blvd., and St. Willibrord in Verdun are observing the feast of Simbang Gabi, or the Mass of the Rooster.

Traditionally, the Mass and novena to the Virgin are celebrated in the Philippines at four o'clock in the morning for the nine consecutive days before Christmas to accommodate farmers and fieldworkers who have to get up early to tend to their fields. But that isn't practical in Montreal.

The custom started in the 16th century when the first Governor-General of the Spanish East Indies, Miguel Lopez de Legazpi observed the feast of the Nativity in the Philippines for the first time, and Pope Sixtus later approved of the custom.

In some parishes, a five-pointed Star of Bethlehem lantern, known as a paról, illuminate the service.

"Simbang Gabi is signifigant because it helps cement family relationships during Advent," one parishioner told VMO. "It is the communal preparation for Christmas, a community get-together. Advent is the spiritual preparation. People who participate in Simbang Gabi bring food and gifts to the church during the offertory which are shared when they get together after the evening Mass. It doesn't matter whether you complete the novena and attend all nine days. What really matters is your intention, what is inside your heart."

The novena began December 16 and culminates with the "Misa de Gallo" on Christmas.

There are approximately 500,000 Filippino-Canadians, and according to the most recent figures available, about 30,000 of them live in Montreal.