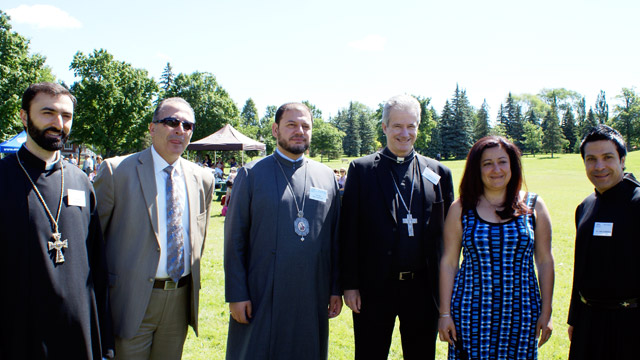 The Christian Gathering took place on Saturday, June 20, 2015, at Ahuntsic Park in Montreal. Its purpose was to make the Christians of Quebec aware of their indispensable role in society and around the world.

The gathering was presided by the Archbishop of Montreal, Most Rev. Christian Lépine, in collaboration with the ecumenical organization The Christian March.

Three speakers came to talk about the situation of Christians from here and elsewhere. Archbishop Lépine spoke first, urging Christians to live their faith to the fullest in society without hiding. Then Douglas Farrow, professor at McGill University, delivered a vibrant speech on the prime importance of Christian values for our civilisation. Marie-Claude Lalonde, National Director of Aid to the Church in Need in Canada, painted a realistic picture of the precarious situation of the Christians of the world.

Many heads from other Christian denominations were very happy to be present as well: Pastor Réal Gaudreau from the Evangelical Church La Bible Parle, who initiated these gatherings in 2011, Father Daigle, parish priest of the Catholic church St-Vincent de Paul in Laval, Pastor Khatchikian from the United Church of Canada, Pastor Dabbo from the First Armenian Evangelical Church, Father Daher, parish priest of Notre-Dame du Liban Parish in Laval, and Father Paul Kennington, parish priest of the Anglican cathedral in Montreal, who prayed for the unity of all Christians. Even Maria Mouranie, the Member of Parliament representing Ahuntsic, was present, as a Catholic.

Between the speeches and well-chosen prayers, the crowd enjoyed the music, hymns, and dance of the various Christian groups of Quebec: Chœur de Jérusalem, Chorale jeunesse de Notre-Dame des Philippines, and Chorale maronite de l'Église St-Antoine-Le-Grand. Singer Jessica Poulin and her band "rocked" the audience, and Father Kamil Ishak, from the Syriac Orthodox Church, delivered a remarkable performance singing in Arabic his own composition called "Noun" (the letter "N" in Arabic), which recounts the 2014 massacre of Christian families, whose homes had been marked with the Arabic equivalent of the Roman letter N.

The president of the event, Jeannelle Cantin, addressed the crowd with these words: "All Christians must rise at this critical moment in our history to promote the founding Christian values of our identity and our civilisation. If we do not speak up and if we do not rise up, we will leave the door open to a society without life and without love. We must respond to Jesus Christ's call!"

Following a dazzling hip-hop and rap performance by Father Gémin and his acolytes from La Famille Marie-Jeunesse, Archbishop Lépine gave his blessing and delivered the closing remarks: "I have known Marie-Jeunesse for a long time, but I had never seen them like this!" Everyone parted saying, "See you next year!"

{{VIDEOBOX_STANDALONE::740}}
Laudato Si: on the Care of our Common Home
A Relic of Saint John Paul II in Montreal

A Relic of Saint John Paul II in Montreal