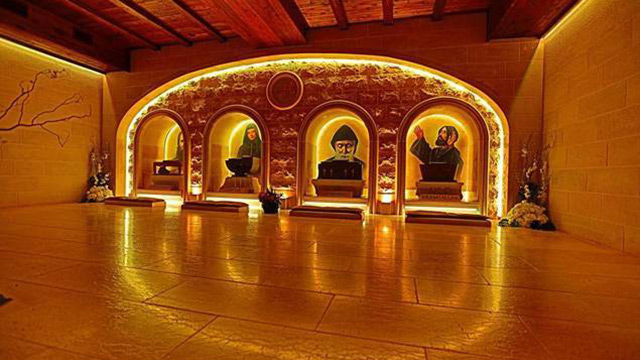 On October 10, under the patronage of Archbishop Lépine, the Lebanese Maronite Order (OLM) inaugurated a sanctuary at its Montreal monastery containing relics of four of its saints, Charbel, Rafqa, Nehmetallah, and Estephan.

As of 5 p.m., the faithful, who had begun to gather in large numbers hours earlier, filled the church and the monastery's great hall. Several prominent people from Montreal's religious and political spheres were present. Most Reverend Christian Lépine unveiled a plaque commemorating the event. The Apostolic Nuncio to Canada, Most Reverend Luigi Bonazzi, and the Maronite Eparch of Canada, Bishop Paul-Marwan Tabet, participated in the ceremony, as did Father Guy Chapdelaine, Chaplain General of the Canadian Armed Forces, members of the Maronite clergy of Montreal, and representatives of all the Eastern Churches of the diaspora. Sheikh Naïm Abbas, president of the Lebanese Islamic Centre in Montreal, represented the Shi'ite community during the ceremony. The Consul General of Lebanon, Fadi Ziadé, former Member of Parliament in the federal riding of Ahuntsic, Maria Mourani, and representatives of Lebanese political parties also attended the inauguration.

After the ceremony, the Saint-Antoine-le-Grand Choir performed a recital under the direction of Elite Possik. Members of choirs from other parishes participated, notably parishioners of Saint-Maron Cathedral. They sang songs dedicated to the four Lebanese saints. After the recital, a cocktail reception was held in the Lebanese Hall at the monastery.

"The Lebanese Saints Have Come to Us"

An ambiance of happiness reigned among the parishioners gathered for the occasion. Not only Lebanese people were there, but also people of other origins, including Syrians, Egyptians, Canadians, and Haitians. "Instead of us going to their home in Lebanon, these saints came here to live among us," said one of the faithful, rejoicing.

"This sanctuary allows me to get to know the saints, who have been recently canonized," stated Rita Kassatly, a Lebanese immigrant who arrived in Montreal twenty years ago. "When I arrived in Montreal, I knew of Saint Charbel very well, but I did not know very much about Blessed Brother Estephan, or Saint Nehmetallah," she added.

Father Abbott Tannous Nehme, Superior General of the Lebanese Maronite Order and distant cousin of Blessed Estephan Nehme, wrote a congratulatory letter to the monks of his order in Canada: "This sanctuary is a milestone of faith, hope, and love in a city that is one of the major hubs of North America. We hope that it will serve as a place of peace and consolation to all who visit it," he wrote. "I would like to take this opportunity to congratulate Father Superior Jean el-Dahdouh, Father Marwan Issa, and Brother Elie Saad on the establishment of this sanctuary."

Stones and Relics from Lebanon

The sanctuary of the saints of the OLM is now the only place of Maronite pilgrimage in the world to contain relics of all four of the order's saints at the same time. Father Jean el-Dahdouh, the monastery's superior, ordered stones from Lebanon, carved by specialists in the Land of the Cedars for the purpose of building this sanctuary. Two architects designed this project, one a resident of Canada, Fadi Sleiman, and the other of Lebanon, Joseph Saad. The project was entrusted to contractor Toni Bilan. In Montreal, master craftsmen Ghazi Antoun and his brother Georges, immigrants from Mrayjat el-Chouf, were responsible for its construction, working closely with the contractor and other Lebanese workers from the diaspora.

Ex Ossibus (literally from the bones) relics of three of the saints, Charbel, Rafqa, and Nehmetallah, were provided by the Superior General of the OLM, Father Abbott Tannous Nehme, accompanied by certificates of authenticity issued by the Holy See, thanks to the request of the OLM's procurator in Rome, Father Élias el-Joumhouri.

As for Blessed Brother Estephan, given that his body is still preserved and intact, the laws of the Church prohibit the extraction of relics from his body. His monastic hood is being used instead. Father Dahdouh brought the relics himself to Montreal.

"The aim of this sanctuary is to gather not only Christians, but also anyone in search of spirituality," explained Father Dahdouh. "Everyone is welcome. In Lebanon, Muslims, Druzes, and pilgrims of every religion and denomination come to visit the Sanctuary of Saint Charbel and obtain graces. They can visit the sanctuary here as well."

The sanctuary's doors are open from 8 a.m. to 8 p.m. The event was broadcast live by Télé Lumière and Montreal's Arabophone Catholic radio station Sawt el-Rabb.

Translated from an article of L'Orient le Jour