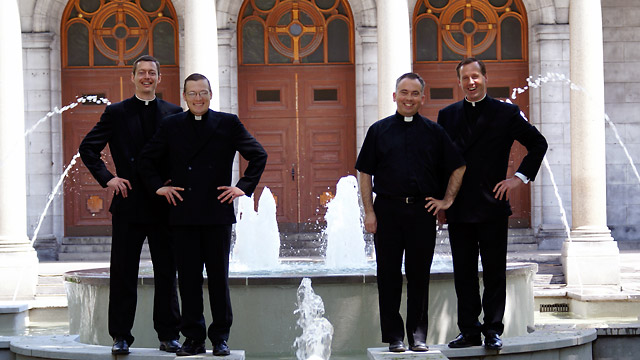 The Legionaries of Christ will be leaving Montreal at the end of the summer. They first met at their residence on Saint-Dominique Street, between Mile-End and the Plateau, and now, without knowing their destination yet, our four Legionaries will soon be going on mission.

Early in their priesthood, they began to arrive in Montreal, one after the other. Father Pierre Caouette from Quebec City arrived first, six years ago. Then came Father Louis de Vaugelas from Tours, France. Two years ago, Father Stephen Dyas, from the States, joined them, followed by Janick Caouette (Pierre's cousin), from Lac-St-Jean, who was named the superior of the community.

"With everything that happened regarding our founder, our global community felt the need to regroup so that we may grow stronger and be together as family. For this, we must all get together. We are waiting to find out our assigned location. The decision was made through prayer and discernment, and we have all come to understand that, to exist truly as a family, as a community, we had to reexamine certain things."

Of course, the families living in Mile-End and on the Plateau heard the news of their departure and were saddened by it. Losing such pastors, who have become true friends, was not without cause for sentiment. "Despite everything, the families expressed that they would like to continue the good work," said Father Stephen. "When they found out, they immediately asked us, 'What can we do to carry on?'"

The Legionaries have several touching memories of their mission here at St-Enfant-Jésus Parish. Father Pierre told us, "I will always remember this father who, participating at a child's Baptism, ask us quite simply what he could do to help his children know God. In less than one year, he became our family ministry's top organizer because his son, during a father-son summer day camp, had had a significant experience with God."

"Yes," continued Father Louis, "our pastoral work among the families here has been very vibrant with our cultural catecheses, a family choir, mother-daughter and father-son camps, rallies, retreats, and day camps, but that which has made the greatest and most powerful imprint on us, is this spirit, this communion with our fellow priests in Montreal, and the life we have shared with the families from the Plateau. We have learned a great deal!"

"Every day we carried out the primary mission of the Legionaries: to strive to make lay apostles of Christ. Making an effort to reach those that are distant from the Church, listening to them, welcoming them, and proclaiming the Gospel to parents and children alike... it has been beautiful."

As they have all witnessed, God had arrived before them, between Mile-End and the Plateau. "And He will do so again, wherever it is He will be sending us next.... We are missionaries!" To God's grace!