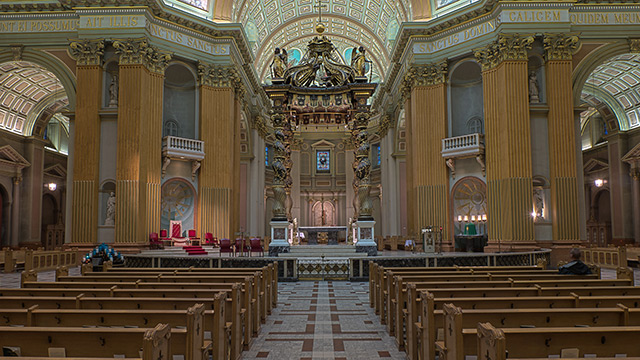 For the sixth consecutive year, the magnificent Mary Queen of the World Cathedral will be opening her doors to all Montrealers as part of La Nuit Blanche à Montréal on Saturday, February 28th, 2015.

Located on the corner of René-Lévesque Boulevard and Mansfield Street, in the heart of downtown, the Cathedral is a scale replica of St. Peter's Basilica of Rome.  Constructed in the late nineteenth century, the Cathedral is widely considered to be one of the most beautiful churches in North America. "It is one of the jewels of our architectural heritage," states the pastor of the Cathedral, Father Alain Vaillancourt,  "and it is our pleasure to welcome visitors to come and appreciate the talents of the many reputed musical artists who enrich our liturgies."

Beginning at eight o'clock in the evening and continuing until midnight, festival-goers can enjoy a series of concerts of singing and sacred music presented in turn by Mrs. Hélène Dugal - the organist appointed to play the great Casavant since 1975, the Choeur polyphonique de Montréal (the Montreal Polyphonic Choir) under the direction of Mr. Louis Lavigueur, and the Schola Laudem quartet, directed by Mr. Alain Duguay. These musical presentations will be complemented by guided tours of the Cathedral's rich history and architecture, all of which has greatly been made possible by Hydro-Québec.

You are cordially invited to experience the majesty of Mary Queen of the World Cathedral!

Take a look at the 360º virtual visit