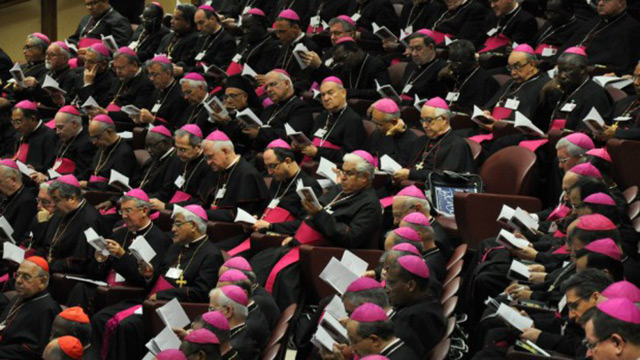 The Synod of Bishops on the Family was opened on Monday, beginning three weeks of deliberation with a spiritual dynamic and in a spirit of communion.

The Synod, a very wide range of profiles and points of view. Pope Francis, at the opening of the assembly, reminded everyone that, "...the Synod is neither a convention, nor a parlor, nor a parliament or senate...The Synod is...the Church that journeys together to read reality with the eyes of faith and with the heart of God."

The very wide range of points of view and of the synod fathers' profiles is apparent.

What is striking at first is the great diversity of the participants, geographic and otherwise. It could seem improbable that this assembly will reach any kind of consensus. This remark was made by Cardinal Vingt-Trois, President Delegate for the first day. In fact, the differences and divisions that had arisen last year are still very present.

Between those who believe that it is necessary to find the right words in addressing contemporary situations and those who defend the immutable doctrine; between those who would like to go toward injured families and those for whom it is more pressing to comfort and support Christian families. Yet, the time between the first session and now appears to have been fruitful. Numerous contributions and studies have allowed for the further examination and clarification of some of the delicate questions that had led to varying interpretation and confusion.

Intended to set the scene, the General Relator's intervention on Monday morning goes beyond the working document. On the question concerning divorced and remarried couples, he clearly reaffirms the doctrine of the Catholic Church. This does not mean, however, that the results are already set in stone. Cardinal Vingt-Trois said that although dramatic changes to the doctrinal plan should not be anticipated, this pastoral Synod intends to accompany the turmoil that the whole of society is experiencing. How, in practice, remains to be determined.

The 2015 synod is an ordinary assembly of the bishops that have been elected by each of the episcopal conferences. The bishops will join the previously mentioned members: the President, the Relator, and the Secretary General; the members of the Curia and of the Synod Council; the bishops and auditors appointed by the pope, etc.