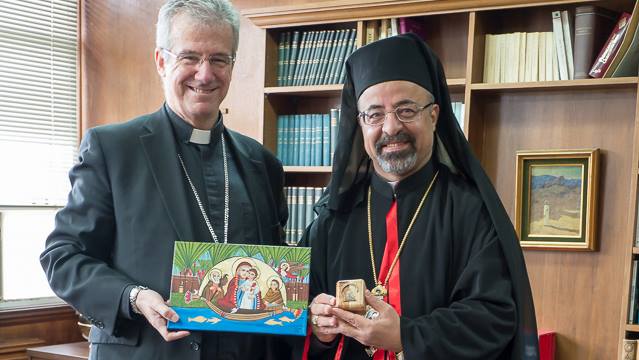 On September 10, 2014, His Beatitude Patriarch Ibrahim Isaac was in Montreal on one of the many pastoral visits he will be making during his trip across North America for the Coptic Catholic community.

After they had a pleasant exchange, Most Reverend Christian Lépine gave Patriarch Ibrahim Isaac a relic of Saint Brother André, and in return, the patriarch gave him a painting of the Holy Family.

Patriarch Ibrahim Isaac left Montreal on September 15 to go to Los Angeles, continuing his tour of the Coptic communities in North America.

His Beatitude was born on August 19, 1955, and was ordained a priest on February 7, 1980. He was sent to Rome for his higher education in 1988. He then returned to the Major Seminary in Maadi, Cairo, where he was a professor of dogmatic theology and rector until 2000. On November 15, 2002, he was ordained bishop of the Eparchy of Minya. On January 15, 2013, he was elected Coptic Catholic Patriarch of Alexandria.

John Paul II: Consecration of Canada to Mary
On September 28 to pray for the upcoming Synod on family

On September 28 to pray for the upcoming Synod on family