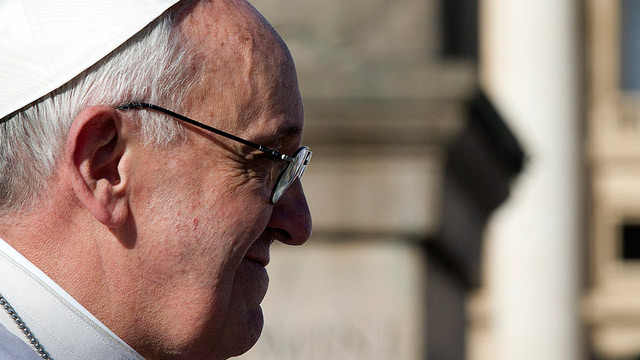 (Radio-Vatican) At the conclusion of the Extraordinary Synod on the Family, Pope Francis addressed the assembly of Fathers, thanking them for their efforts and encouraging them to continue to journey.

Bishops attending the Synod on the Family on Saturday concluded their two week meeting by voting on a final document which will form the basis for discussion over the coming year. Pope Francis, who has followed closely the working of the Synod, addressed the assembly, reflecting on the honest, courageous and, at times, tense debate about the Church's understanding of marriage and family life.

A lengthy standing ovation echoed around the Synod Hall as Pope Francis spoke of the journey that Synod participants have travelled since the opening Mass in St Peter's Basilica nearly 2 weeks ago. He talked of the enthusiasm and grace he'd experienced listening to pastors and to couples sharing their experiences of married life. And he talked of the disappointments, tensions and temptations that have been part of the conversations too. The temptation to be closed into the "hostile inflexibility" of the traditionalist or the destructive temptation to be a liberal "do-gooder." But none of these temptations should discourage us, the Pope said, because this is the Church which is not scared of rolling up its sleeves to tend peoples' wounds, rather than standing aloof and passing judgements from an ivory tower. Following in Jesus' footsteps, it's a Church which is not afraid to eat with prostitutes and publicans, a Church whose doors are always open to help those in need.

The great majority of the bishops gathered around the Pope clearly shared his vision of the Church as they voted on each carefully crafted paragraph of the final Synod document. Using their electronic voting system they gave their Latin 'placet' or 'non placet' to the 3 part text with all the 62 sections receiving a majority vote from the assembly. Only three particular points, unsurprisingly dealing with the pastoral care of gay people and those who've been divorced and remarried, did not receive the hoped-for two-thirds majority, which as the English language press spokesman Fr Tom Rosica pointed out, shows where the bishops have their work cut out for the coming year.

"Keep in mind this is not a magisterial document....the Pope asked for it to be made available to show the degree of maturity that has taken place and that which still needs to take place in discussions over the coming year."

So that's all from the Vatican press office for the Synod on the Family for 2014 - now the real work begins of taking this document back to the dioceses and parishes, in preparation for the bigger and even more significant Ordinary Synod on the Family in October 2015.