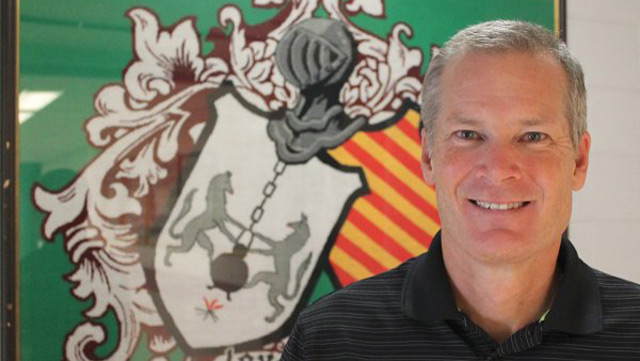 (Ville Marie Online) Richard Meagher was still an adolescent in the 1980s when his father, Ed, became vice-principal of Loyola High School.

At that time, Jesuits ran the school and held all of its key administrative positions. As a layman, Ed Meagher had little hope of becoming principal.  So it is perhaps with a profound sense of satisfaction that his son, Richard, was named principal of the school in August, succeeding Paul Donovan in the position. "Dad would have been the ideal principal," said Meagher, "But when he was here, there were always Jesuits in charge."

Ed Meagher, who died in 1995, was a powerhouse at Loyola for more than 40 years. He taught Latin, Geography and Math, but is perhaps best known as the coach who organized the prestigious winter sports tournament that bears his name.

"I am not trying to be him, I couldn't be him. I think he would say I was crazy to accept the job, but I know he would be proud," Meagher  told Ville Marie on Line.  "For the first year I plan to keep my eyes and ears open and see how we can improve things. Paul Donavan was a visionary so I want to step back for a bit and  look at all he has  accomplished in the past nine years and see where we can improve."

Meagher was a student at Loyola for two years until 1977 when his family moved to Aurora, Ont. following  the election of the Parti Quebec Government.  They returned to Quebec four years later and Meagher took a commerce degree from Concordia University. He spent 10 years in sales and marketing before he joined the staff at Loyola, where he taught history and coached football and hockey.

As principal he has begun a strategic planning process. One of his priorities is to raise academic standards even higher. He also wants to put more emphasis on the school's mission statement,  "A Man for Others," so that students will do more than pay lip service to the notion of public service.

"I suspect we are somehow missing the spirit that we have an obligation to do something for others without expecting something in return for it," he says.

Meagher will have to deal with the ramifications of his predecessor's decision to take the Quebec government to court for the right to teach religion and ethics from a Catholic perspective at Loyola. The Supreme Court of Canada is expected to hand down its decision on the challenge this fall.  Meagher won't speculate on what will happen if Loyola doesn't win.

"If there is a contingency plan, it is in Paul Donovan's head, and he has not shared it with me," he laughs.  "The Supreme Court challenge is his baby, and even though he is on sabbatical in Europe, I don't think he can walk away from it that easily. Whatever happens, whatever needs to be done, he'll do it."