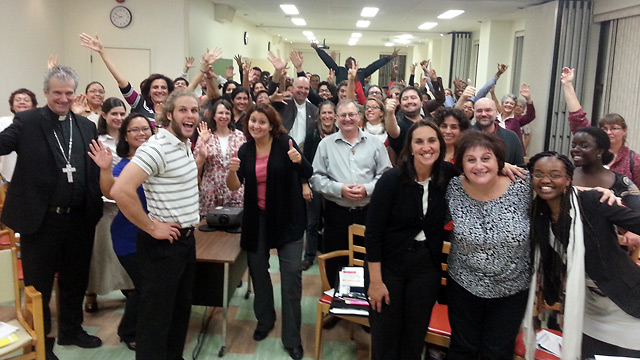 On Tuesday night of September 30th, 2014, over 80 people packed into the Archdiocese of Montreal at 2000 Sherbrooke Street West for Mission Jeunesse-Youth Ministry’s launch of the 2014-2015 pastoral year.

The evening started with a challenge from Mission Jeunesse-Youth Ministry director Isabel Correa: "Young people today communicate through Facebook statuses and tweets in 400 characters or less. I invite you to do the same while introducing yourselves and sharing one bit of good news from your community".

The introductions that followed were as diverse as they were numerous; youth ministers and catechists came together from all over the island, and from various communities and movements.

During the evening, Archbishop Christian Lépine was also present to address the assembly and proposed reflection on the pastoral challenges of our times concerning young people and the Church of Montreal, as a whole. He brought up the isolation felt by some parishes and communities, who, though fervent in their faith, are oftentimes left with the impression that there is no one with whom they can share the beauty of that faith.

The Archbishop, therefore, encouraged the Youth Ministry leaders to go out, like Mary after the Annunciation, and encounter other communities, to step out of their isolation and recognize that they are not alone in the mission of evangelization.
These Youth Ministry Leader Gatherings are an important way that the Mission Jeunesse-Youth Ministry coordination team helps to encourage and accomplish that goal.

Afterward, the MJ-Youth Ministry Team continued by presenting projects for the upcoming year, including a few of the following:

Additionally, certain groups belonging to the MJ Network came to propose their projects;

Ottawa Shooting : Canadian Bishops Statement
The Archdiocese is Now at Your Fingertips!

The Archdiocese is Now at Your Fingertips!