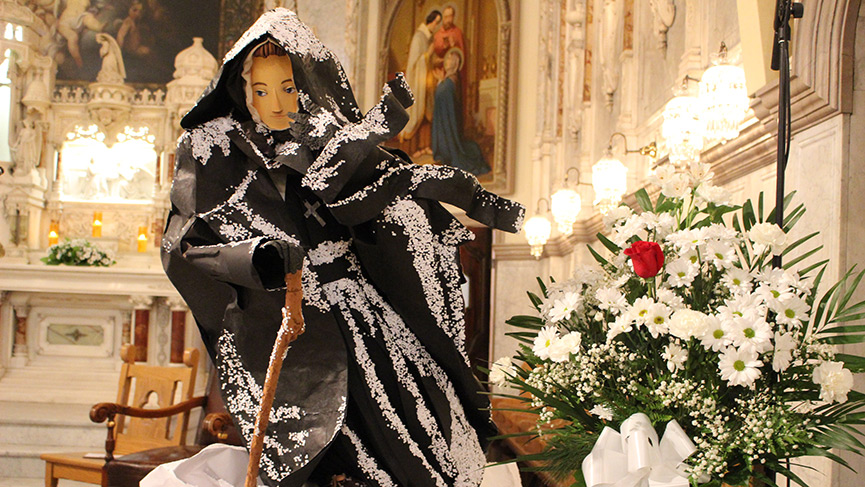 The 400th anniversary of the birth of St. Marguerite Bourgeoys was celebrated on Sunday, Jan. 12, the Feast of the Baptism of the Lord, at Notre-Dame-de-Bon-Secours Chapel.

Saint Marguerite Bourgeoys is an historical figure in Montreal, Quebec and Canada. Born in Troyes, France, she took part with Jeanne Mance and Paul de Maisonneuve in the development of Ville-Marie (the city of Montreal) where she opened the first school. She also played an important role in the construction of Montreal’s first chapel, Notre-Dame-de-Bon-Secours, and founded the Congregation of Notre Dame (CND) (http://www.cnd-m.org/fr/accueil/index.php). Marguerite Bourgeoys was canonized in 1982 by John Paul II and, thus, became the first Canadian Saint.

Bells were ringing as the faithful went into the Old Montreal small chapel despite the storm. Many CND nuns were in attendance, and believers or members of the Marguerite Bourgeoys and the Maison Saint-Gabriel Museums as well. Archbishop Lépine presided the celebration in the presence of many priests, including Bishop Blanchard.

The chapel sanctuary had been decorated especially for that Mass. In front of the altar stood a blue sheet and a globe of the Earth, and to the right a statue of the saint made out of paper, as if she were braving a storm. “Like her, you went out today though you were asked to stay in,” said Archbishop Lépine, laughing, as an introduction to his homily. Just like Marguerite Bourgeoys who did leave her country, he invited the faithful to come back to the chapel, to travel a short distance outside in order to cover a long one inside.

Facing an assembly composed of experts, Archbishop Lépine did not recall the life of Saint Marguerite, but spoke the words of the Virgin Mary to the saint before she embarked on her journey: “Go, I will not abandon you.” “Those words come from Heaven,” the Archbishop insisted both in French and English. They mean: “Go, give yourself; feel, build and survive the ordeals; love; I will never abandon you.” The link Montreal and Mary share does not pertain solely to the past. It is there today, and the Virgin Mary shares her unique love for each of her children. Whatever they undertake, she is there.

As he recalled Saint Marguerite Bourgeoys’ youth when she headed toward New France, Archbishop Lépine spoke at length of Mary, the one who has today the power to touch the youth, to urge the faithful to pray for them. “As human beings, we seek the absolute: young people need God, because they seek that absolute, and only God can fulfill that need.”

The Poor in Spirit

Though Saint Marguerite Bourgeoys felt strong desires, abandonment, the long and terrifying journey by boat through the Atlantic, the winters, the difficult mission toward the youth, men’s opposition, fire, and the struggles of finding stable followers, “her poverty of spirit brought her closer to God, helping her to devote her life entirely to Him.” And Archbishop Lépine reminded the faithful of their mission: to serve by spreading God’s Love and by offering Him one’s life, because “only God builds the future and the world.” 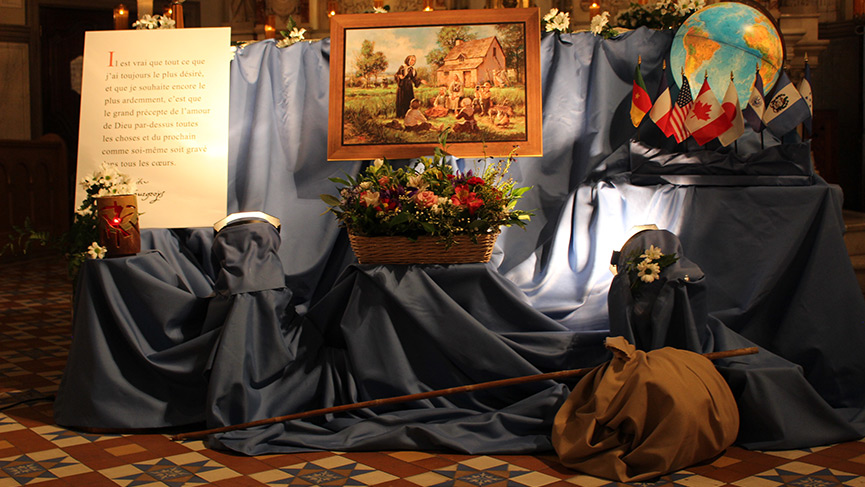 A beautiful procession followed. Each universal prayer was preceded by quotes of the saint. For each quote, a symbol was left at the altar. Flowers symbolized “the wide garden God created, each community being a patch of it,” and flags, all the countries the nuns were called to serve in. While the assembly was praying for migrants around the world, a bundle was laid down to remind us that Saint Marguerite Bourgeoys left home “empty-handed, with only a small bundle that could be easily carried.” In the end, a mother accompanied by her daughter brought a painting of “Saint Marguerite Bourgeoys teaching in the fields,” and at that same moment we could hear a prayer intended for young people and teachers of the world.

After the Eucharist, Sr. Violaine Paradis, CND, interpreted a wonderful, melodious song on the life of Saint Marguerite Bourgeoys and of the CND. The refrain was quickly echoed by the assembly:

Let’s hurry up on the road!
Marguerite reminds us;
The heart of our neighbour
Awaits our visit…
Let’s go everywhere
Visitation of God!

Sr. Ercilia Ferrera, assistant to the Superior General of the congregation, concluded the celebration by conveying the still contemporary message of Saint Marguerite Bourgeoys. Her thoughts and actions, her spirituality and her profound faith “keep us on the road.”

Blessing from the Archbishop