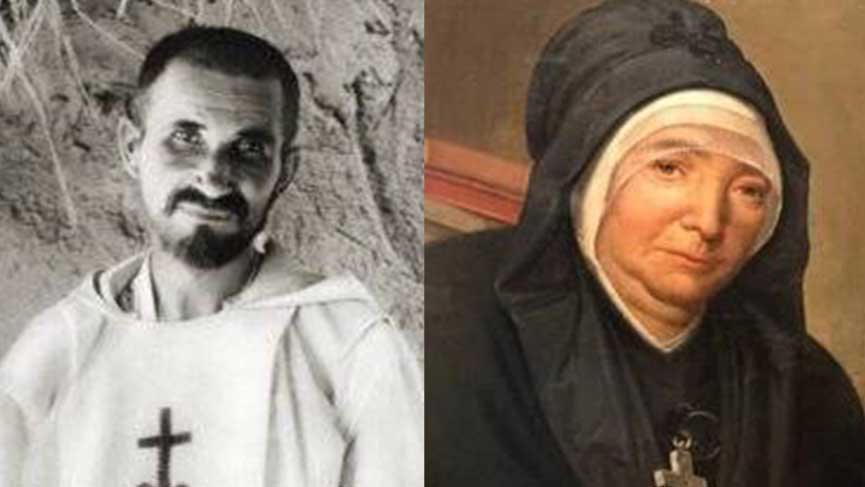 On Sunday, May 15, in Rome, the canonizations will be celebrated of Charles de Foucauld, Marie Rivier and seven other blessed persons well known in the Tamil and Italian communities. This is a cause for great joy in Montreal, where their legacy is very much alive!

Charles de Foucauld (1858-1916) lived among the Tuareg people in the desert in Algeria. His story inspires us through his life of poverty and hospitality, his devotion to the Eucharist and his engagement in dialogue with the Muslim people. He is the spiritual reference for the religious community called les petites sœurs de Jésus, who live in Saint-Eusèbe Parish in the Centre-Sud area of Montreal. One of the sisters of this community, Catherine McKee – who is also the sister of Fr. Francis! – is the author of his biography, Charles de Foucauld, le frère universel, Éditions Mediaspaul, 2017.

Charles de Foucauld is also the inspiration of the fraternal community Jésus Caritas, which comprises nearly 200 priests in Quebec and the region of Acadia, as well as lay fraternal societies such as this one in Montreal, and a youth group in Laval. There is a rue de Foucauld named for him in Saint-Léonard and an avenue Père-Charles-de-Foucauld in Montreal North.

Marie Rivier (1768-1838) also has a street named for her: rue Rivier, near Saint-Émile Church in Rosemont-La Petite-Patrie. Marie Rivier was dedicated to children’s education and catechism. She founded the community of Les Soeurs de la Présentation de Marie, whose members taught at Saint-Émile parish school and still have a strong presence in Montreal. The school has since merged with Saint-Esprit.

The celebration of this Mass, with narration in French, will be livestreamed at 10:00 a.m. (Rome time) on Sunday, May 15, on the vaticannews.va website, on its YouTube channel and on Facebook live.

The Holy father’s homily can be found in its entirety on the website: vatican.va.

For further information concerning the canonization of St. Charles de Foucauld and his spirituality:

For further information concerning the canonization of Saint Marie Rivier:

40th Anniversary Commemoration of the Beatification of Marie-Rose Durocher
What are the plans for the 10th World Meeting of Families?

What are the plans for the 10th World Meeting of Families?