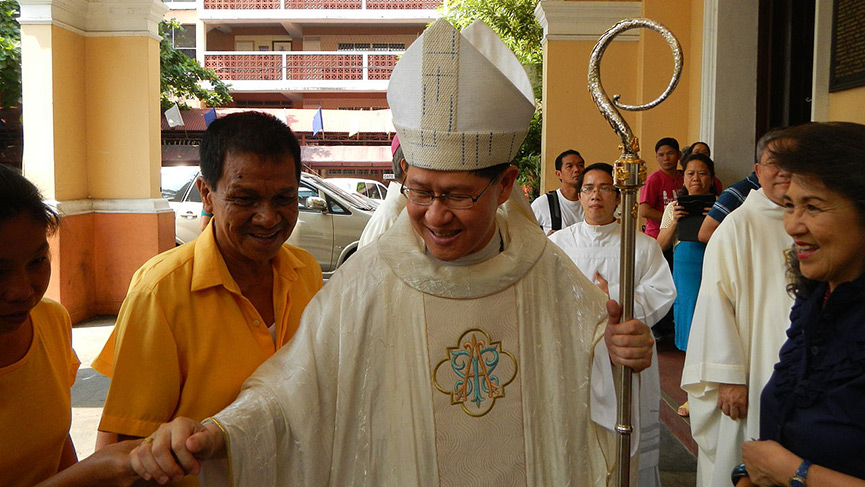 In an interview with the Vatican’s Osservatore Romano newspaper, the new Prefect of the Congregation for the Evangelization of Peoples reflects on the theme of evangelization and expresses gratitude as he begins his new mandate.

At the inauguration of the Veritas Institute of Social Communication in the Filipino capital, the Cardinal Archbishop of Manila spoke of missionary work, outlining the pastoral challenges of communication and evangelisation in the digital world. "Every Christian is called to communicate, through his life, the presence and compassion of Christ", he said.

Cardinal Luis Antonio Tagle has been appointed, by Pope Francis, as Prefect of the Congregation for the Evangelisation of Peoples.

In an interview with the Vatican’s "L'Osservatore Romano", Tagle spoke of his new position, saying "if this is the will of God - and I am convinced it is - I am happy to begin this new service. The Holy Father sent me a message, giving me a new responsibility. I am grateful to him for the trust he has placed in me".

The cardinal recalled the “many e-mails and messages” he received “from all over the world”, after the news of his appointment came out. From Africa, from the Middle East, from Asian countries such as Japan and Cambodia and from many other nations, he said, adding that “this also shows me that there is enthusiasm among the faithful for the work of evangelisation”.

Whilst speaking at the opening of the new institute, in Manila, Tagle took the opportunity to dwell on the theme of evangelization. He noted that despite the need to have qualified personnel for the various areas of formation and social communication, the proclamation of the Gospel begins with a "spirituality of listening".

We are called to "listen to God and listen to one another with patience, interest and attention” to play our role in evangelisation, said Tagle. Very often when we talk about communication, we are in a hurry and we do not listen to other people. We do not pay much attention to listening to others with the heart”, whereas it is “a necessary first step in evangelisation”.

In the work of evangelization and, in particular, in the work of social communication it is necessary to involve more and more young people and women, said Tagle. "Young people know the digital world better than we do”, he continued.

“Women also have a natural predisposition for interpersonal communication”, he went on to say. When I call my parents and talk to them, my father says very few sentences, and then passes the phone to my mother, saying: talk to your mother. "Women and mothers are experts in communication”.

The cardinal's speech then extended to the pastoral challenges of communication in the digital age: “We are living in the age of artificial intelligence,” he said noting that nowadays the Internet is everywhere and that people are connected for twenty-four hours a day.

He said that a cultural change is taking place “because it affects the body and mind of people," and that in this era of globalization, marked by artificial intelligence, "we Christians are called to develop other types or forms of intelligence, such as relational intelligence, which encourages a person to generate trust and security”.

“In our world today, so much fear, suspicion and prejudice. We don’t know whom to trust,” said the cardinal. “We need people who can generate that atmosphere of trust.”

Tagle went on to elaborate on the concept of trust noting that in a climate of trust in one's neighbour "our common mission is to proclaim the good news of the Gospel”.

“Go and proclaim the God who speaks, communicates and listens," he added, highlighting the consoling presence and compassion of Christ Jesus".

The Archbishop of Manila specified that this is not a “do-it-yourself” task, but a mission to be accomplished for and with others, “especially with Christ”.

Mission, he explained, is done in community, it’s ecclesial: “the whole Church is in mission”. Every baptized person, Tagle said, is sent on mission by Christ and the Church: every baptized person who lives life in Christ, participating in his death and resurrection, "is a missionary".

Thus, he continued, “a personal encounter with Jesus Christ is necessary", because "there is no mission, no proclamation of the Gospel without an encounter with Jesus who is the Gospel”. And our mission, he reiterated, is to bear witness to Christ, which means “carrying the cross with Christ and living his charity, sharing it with the world, especially with those in need”.