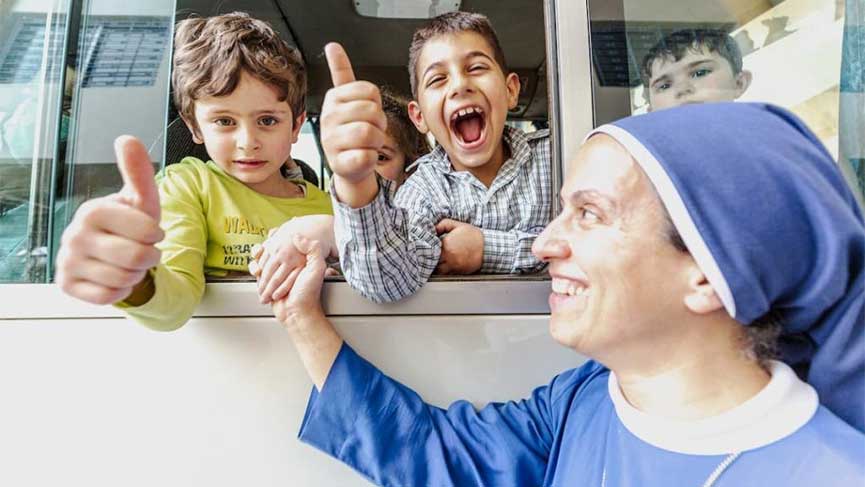 “Our project partners sometimes feel discouraged and tired, but fortunately, they have not lost hope,” says Marie-Claude Lalonde, national director of ACN Canada.

“They are able to keep this hope because they know we are with them, that our benefactors are answering the call, and that we will do everything in our power to help them stay in their countries and live there in decent conditions.”

Aid to the Church in Need’s 2022 Christmas campaign focuses on Christian communities in two devastated Middle Eastern countries: Syria and Lebanon. “We have produced a series of videos that show just how tragic the situation is for families and their children. Despite this, they are aware of all the support we have already given them. In the end, they all say a big thank you to ACN benefactors who, since 2011 in Syria and since 2019 especially in Lebanon, have supported them. A warm Shukran! to our benefactors in advance on their behalf,” says Ms. Lalonde.

In both countries, the support consists of housing assistance, the distribution of basic supplies, including food, the purchase of medicine, and pastoral assistance through the organization of youth camps, amongst others. “In Syria, we also support young scouts by providing them with a uniform. Being part of a group in which the values of respect, mutual aid and fraternity are encouraged is one of the only ways to keep young people off the streets, where an entire generation is at risk of learning and perpetuating violence,” Lalonde insists. “Our support allows Christians to stay on their ancestral land. Few people realize that Syria and Lebanon are the historic homes of the first Christian communities,” she stresses. “Supporting the schools there, the young couples who want to start a family, or the nuns who run schools with very little means is not only allowing these communities to remain in their homeland, but it is also ensuring diversity in the Middle East—a land where Christian communities have often played important mediating roles in the midst of conflict,” says Lalonde.

To view and share the videos, and to donate to Aid to the Church in Need’s 2022 Christmas Campaign, please visit:
https://acn-canada.org/christmas-2022/

In Syria, the United Nations (UN) considers that 90% of the population is living below the poverty line. Pope Francis has called the situation a “scandal” in this country still torn apart by the effects of the war that began in 2011 and which is, despite the return of a certain normality (depending on the region), still at risk of erupting once again.

Of the country’s 23 million inhabitants in 2011, half have fled their homes: 5.5 million are refugees in the region while 6.7 million are internally displaced. In Canada, 60,000 families have been welcomed so far. Since 2011, ACN has supported projects in Syria, mostly in emergency aid (1118), for a total of 75 million dollars.

In Lebanon, misery is taking hold in what was once considered the Switzerland of the Middle East. The World Bank estimates that the financial collapse seen since 2019 is only matched by that of the mid-nineteenth century. More than 70% of the population currently lives below the poverty line. The economic crisis, largely caused by inaction on the part of the government, has been exacerbated by the COVID-19 pandemic as well as the August 4, 2020 explosion at the Port of Beirut. Christians were particularly hard hit, with one of their main neighbourhoods located just one kilometre from the blast.

Aid to the Church in Need invites you to be generous. On behalf of those in need in Syria and Lebanon, we extend a warm thank you, or as they say, Shukran!

To view the campaign videos and to donate online, please visit: https://acn-canada.org/christmas-2022/

Meditations: Immaculate Conception of Mary
An Advent of blossoming: the story of Jannatul Riaju

An Advent of blossoming: the story of Jannatul Riaju