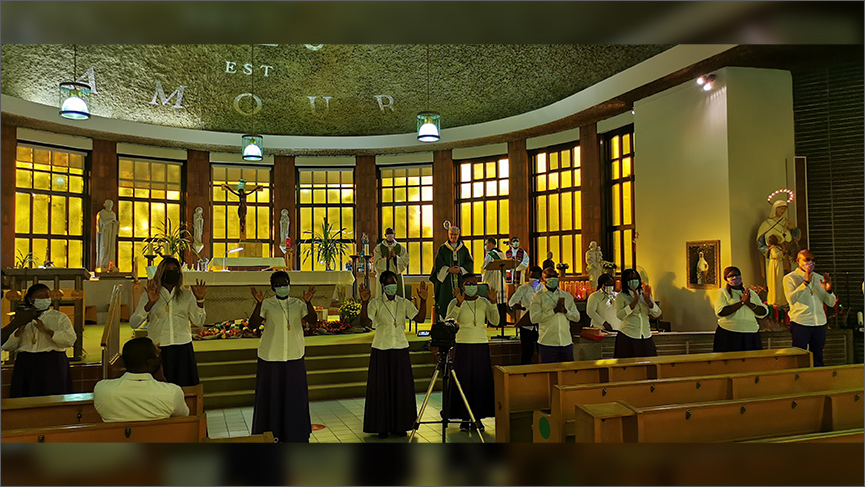 Preceded by Archbishop Lépine and four other priests, eight women and three men in white and mauve robes proceeded up the main aisle of Saint-Simon-Apôtre Church. They were the eleven lay people come this Sunday afternoon to make their initial commitments to the Communauté Mère du Divin Amour: the first such commitments to be celebrated in Montreal! The congregation sang rhythmical songs to accompany the Thanksgiving Mass being celebrated on this day that marked for these women and men the culmination of their journey of at least three years in a community house or fraternity Each of the eleven had fulfilled all the community’s program and training requirements.

The Communauté Mère du Divin Amour had its origin in January 1989, when a group of young people from the small fraternity of the Catholic Charismatic Renewal in the village of Blockhauss in Côte d’Ivoire gathered together without quite knowing yet what the Lord had in store for them. Indeed, until the moment when one of them, Brother Clément Akobe, was given the founding vision "To love Jesus and to make him loved," none of them knew to what the Lord was calling them. Within a few years, the Communauté Mère du Divin Amour was founded, made up of married and single people, priests, consecrated lay brothers and sisters, and religious.

The community’s vocation is "To Be Love in the heart of the Church and in the World; meaning, to manifest the love of Jesus Christ by keeping it real and alive. Larissa, one of the participants making her commitment today, expressed it well when she spoke of the scandals that the Church faces today and said that she wants to be one of the ones who "will be able to comfort the hearts of the afflicted by giving of the Love of Christ, by sharing part of ourselves with the least among us. I want to bring a little light to the world."
The community’s spirituality is summed up in three words: Silence, Humility and Love. Jesus remains the rock of the community and the Virgin Mary its pillar. True to its origins, the community lives the charismatic experience, but it is nonetheless Marian. "With Mary and by the power of the Holy Spirit, we want to build a civilization of love."

Called to be offered to the world

In his homily, Archbishop Lépine came back to this civilization of love. Addressing the future candidates for commitment, he asked: "To what is Christ calling you?" This day, these eleven were called to follow Jesus because they "choose to follow him to the end of Love, of trust and of giving. He calls you to offer yourself to the world, to love him for the whole of humanity," explained Archbishop Lépine, emphasizing that this commitment is made by each individual as well as by the community.
Finally, Archbishop Lépine emphasized that God, in choosing us, "prepares a way for each one of us," and that it is "only by the grace of God, through the intercession of Mary, that, whatever our path in life, the Lord calls us to love, to give Love, to give by relying on each other."

An individual and community commitment

Before the offertory, the commitment ceremony took place, the gesture by which those who have been called become members of the community. Each person was called by his or her first name and asked to name the state of life chosen in the community. On this Sunday, those lay people who are married or who have chosen to be married were making the commitment.
And so, before the Archbishop of Montreal and the Provincial Europe Amériques Cmda Father Ferdinand Sébré, the eleven candidates: Marie-Olivia, Larissa, Stella, Elise, Chantal and Barnabé, Brigitte, Cyril, Nicole, Evelyne and Marc-Antoine, all made their commitment to remaining faithful to Jesus and to the Church and to the founding vision of the community. They also committed themselves to being available for the community, offering themselves entirely to Christ and living in harmony with the brothers and sisters of the community.
After the presentation of the Cross of the community, priests and relatives who had come to show their support offered congratulations to the newly committed – from a distance, due to the guidelines in effect – and applause and shouts of joy followed!

At the end of the celebration, Father Ferdinand Sébré offered heartfelt thanks to Archbishop Lépine for attending and for welcoming him here in the diocese of Montreal. Then, on behalf of the community, he offered him a beautiful painting depicting Jesus and Joseph.

There was great joy in their faces as candidates signed the register. For the Provincial Europe Amériques Cmda, who had come especially from Paris, this journey was "well worthwhile: this Mass was an important moment of thanksgiving for the people involved and for the Communauté Mère du Divin Amour growing now in Canada! For Chantal, who made her commitment at the same time as her husband, Barnabé, "It is a great joy to belong that much more to the Catholic Church to follow Jesus as true disciples and inspired by a great power to hellp our brothers.

Entering into the experience of the diocesan synod with the Holy Spirit!
Deadline extended for first phase of the synodal process

Deadline extended for first phase of the synodal process