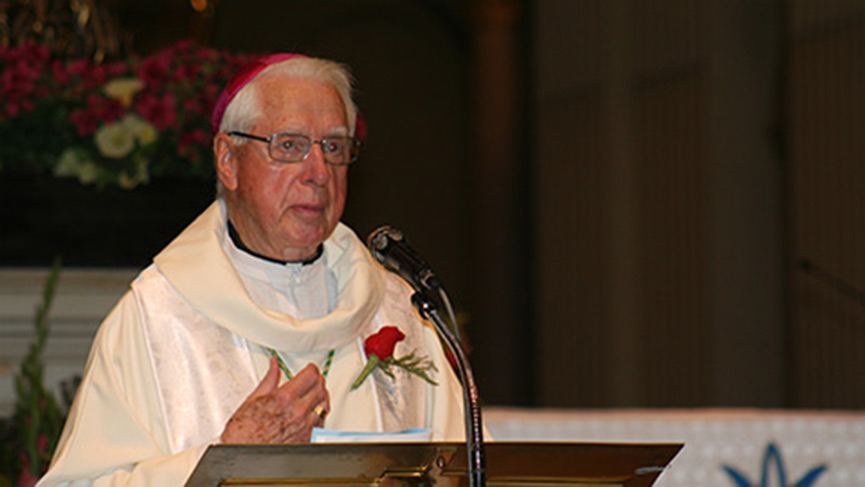 It is with sadness that we announce the death of Most Rev. Gérard Tremblay, P.S.S., Auxiliary Bishop Emeritus of Montreal. He died September 28, 2019, at the Service de santé de Saint-Sulpice in Montreal, one month prior to his 101st birthday.

He is survived by his family, friends, brother bishops, and the members of his Sulpician family, to whom we offer our sincere condolences. The funeral mass will be held Oct. 12, 10:30 a.m., in the main chapel of the Grand Séminaire de Montréal, with Archbishop Christian Lépine as the main celebrant.

Gérard Tremblay was born in Montreal, in the parish of La Nativité-de-la-Sainte-Vierge in Hochelaga, on October 27, 1918. After attending Collège André-Grasset (Classical Studies from 1933 to 1941), he studied theology at the Grand Séminaire de Montréal.

He was ordained to the priesthood on June 16, 1946, at Saint-Marc Parish in Rosemont, by Archbishop Joseph Charbonneau. As a member of the Society of the Priests of Saint-Sulpice, Bishop Tremblay devoted his priestly life primarily to two ministries: education and social action. From 1946 to 1958, he was a teacher at Collège André-Grasset. He then served as the financial administrator and a professor at the Grand Séminaire de Montréal until 1966, during which he also taught religious studies at the Collège de Montréal for four years. In 1966, he was appointed pastor of Annonciation Parish in Oka, where he served for seven years. He then became the parochial administrator of Saint-Jacques Parish in Montreal, from 1973 to 1976. From 1970 to 1976, in addition to his work as a pastor, he also served as Second Consultor for the Sulpician Province of Canada.

In September 1976, Archbishop Paul Grégoire appointed him Episcopal Vicar for the Laval Region. He was named a prelate of honour on June 9, 1978. On March 20, 1981, Pope John Paul II appointed Msgr. Gérard Tremblay the Titular Bishop of Trisipa and Auxiliary Bishop of Montreal. When Pope John Paul II accepted his resignation on Aug. 27, 1991, Bishop Tremblay assumed the title of Auxiliary Bishop Emeritus of Montreal. From 1991 to 1996, he served as superior of the Séminaire de Saint-Sulpice of Montreal, where he has resided since, continuing in active ministry until recent years.

Pope establishes Sunday of the Word of God
The Jourdain Centre: where spiritual renewal is a priority

The Jourdain Centre: where spiritual renewal is a priority