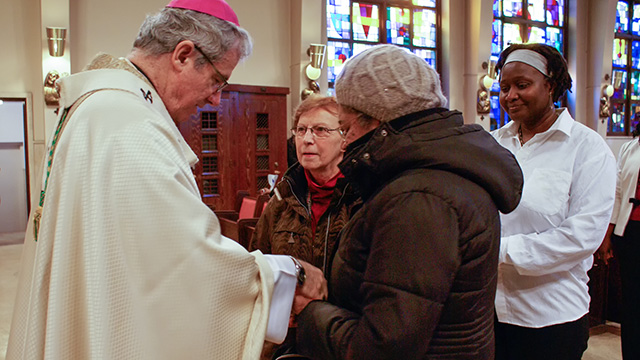 It was a first for the World Day of the Sick. On February 11, 2016, on the feast of Our Lady of Lourdes, the Pastoral Home Care team held a full day of prayer at Saint-Jude Sanctuary in Montreal, at the very location where this organization was founded in 1992.

It was a first for the World Day of the Sick. On February 11, 2016, on the feast of Our Lady of Lourdes, the Pastoral Home Care team held a full day of prayer at Saint-Jude Sanctuary in Montreal, at the very location where this organization was founded in 1992.

For the occasion, Pastoral Home Care opened its doors to the public to allow everyone to visit its site and delight in a warm bowl of the most comforting soup. It was like being at grandmother's house...

The day of prayer for the sick began at 9:30 a.m. with Laudes, followed by the Rosary and Adoration of the Blessed Sacrament. Then, the priests positioned themselves in the four corners of the sanctuary to offer the Sacrament of the Anointing of the Sick to all the faithful who desired it.

In fact, although the Archbishop of Montreal was presiding at the Mass for the sick at Mary Queen of the World Cathedral that same evening - like he does every year - he wished to be present at Saint-Jude Sanctuary during the day to personally meet with the Pastoral Home Care team and all its volunteers.

During his homily, Most Reverend Lépine delivered a touching and astounding meditation on the meaning of illness and the reward it brings: "Do not squander your illnesses!" he shouted. "We do not wish to fall ill. It is clearly not something anyone hopes for, but it happens, and it could happen to any of us. So, if it does happen to us, it is our duty to make it a time of encounter with the Lord. Someone who offers his or her suffering to the crucified Jesus, participates not only in the cross, but also and especially in the resurrection! He or she obtains peace! We should not squander our illnesses, as they offer us the occasion to get closer to Jesus. Have you noticed that illness eases our hearts and our souls? Illness calms us; it tears us away from condemnation - we live in a world that always condemns everything and everyone... Let us, therefore, not squander our illnesses!"

Pastoral Home Care was founded in 1992 by Sister Madeleine Saint-Michel with the assistance of Father Claude Fournier, at the time when he was the parish priest of Saint-Jude. Today, Pastoral Home Care has 350 active volunteers, who, each year, visit almost 12,000 sick or aging individuals at home. It receives financial support from Les Amis de Jeanne-Mance and from the Archdiocese of Montreal.

Pastoral Home Care is located at 10120 D'Auteuil Avenue in Montreal, and can be found on Facebook.