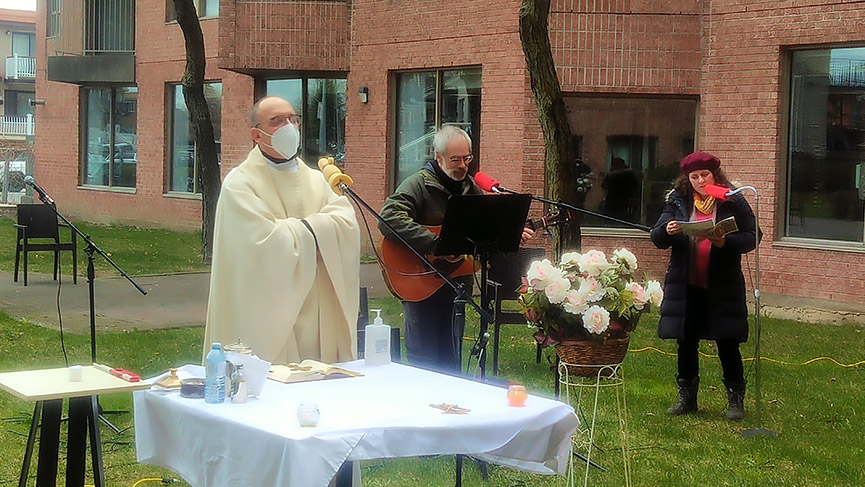 Loneliness is a reality that has been compounded during this period of social distancing, especially for seniors. Moved by their plight, a volunteer at the Résidences Les Floralies LaSalle seniors’ home spearheaded an initiative to help render some comfort and a supportive presence to the faithful, while keeping the safety norms in mind. Her testimony illustrates another example of pastoral creativity amid the current pandemic, which has left this most vulnerable population especially ravaged.

Fr. Alain Mongeau, E.V., who currently serves as Episcopal Vicar for the French-language Deaneries in the Eastern Region and pastor of St-Jean-Baptiste Parish located in the Plateau district, was approached by one of his parishioners, Adélaïde Doussau, who had been working at Les Résidences Floralies LaSalle during the crisis. The project soon took shape and it was decided that a special mass be offered at the private seniors’ home, which was recently hit hard by COVID-19, affecting about 50 percent of its residents, Doussau reported.

In addition to organizing the mass, Doussau sought other ways to get involved, this time as a volunteer, to help support the residents and staff. As a result, she provided some musical entertainment onsite, together with her friend, Réal, inspired by a video of a fellow parishioner singing just outside the windows of another residence. "Then, as it was very well received, I gently asked if they thought a mass would be nice, because there were many Catholics living in the home, and the management immediately was on board," explained Doussau.

Mass was celebrated outdoors on Mother's Day: "Those who wanted to, came to the balconies or windows while we were in the courtyard," explained Fr. Mongeau. "It was very beautiful. There were faces in the windows, people waving at us, and it was Mother's Day. It was moving and very meaningful.

When time came to administer Communion, an organized system facilitated by caregivers made it possible for some people to receive Communion: "This host had a special flavour, a very real presence," said Doussau. There were people who were very moved, saying it was as if God was coming towards them," said Fr. Mongeau. He added: "Given that it was very cold out, those who were on the balcony went back indoors, and when I looked up, there were faces at the windows. It's an image I won't forget. There were people blessing us from their windows, there were people singing...".

For Doussau, as well, the image of these faces was powerful: "It was very moving to see the people at their windows. It's also a bit difficult because there were faces through which you could sense the loneliness. They're very well looked after there, but it's still difficult to maintain social distancing when you're confined to your room," she said. This initiative is deeply rooted in the calling she receives from the Christian mission: "For me, it's beautiful because it has a real impact. It was meaningful for the people present, it created joy. You had to be a little bold, a little crazy, a little creative, and that's what we did. And I was also very grateful that Alain, Réal and Yvan (who filmed) were all on board."

In the same way, Fr. Mongeau was convinced that this type of initiative was "right on the nose": "It forced us to go to what we know well as the ‘peripheries’. This is one of them. [Seniors’ residences] are really a frontier of isolation. and then of suffering, and it is very relevant that the Church be present wherever it can." In this way, he sees his vision of the Church enriched by the COVID-19 crisis.

Lastly, Fr. Mongeau added: "We plan to perhaps try to do this again at other residences. We keep in touch with one another. As for me, well, I would be happy to continue doing this on Sunday afternoons, after the online mass, because it reaches out to people." More mass celebrations are being planned for the near future at different local seniors' residences.

To catch a glimpse of this beautiful moment, visit the Facebook page of Les Résidences Floralies for a video montage of the event.

Pope at Pentecost: Holy Spirit unites Christians as God’s children in self-giving
US Bishops: Systematic racism led to the death of George Floyd