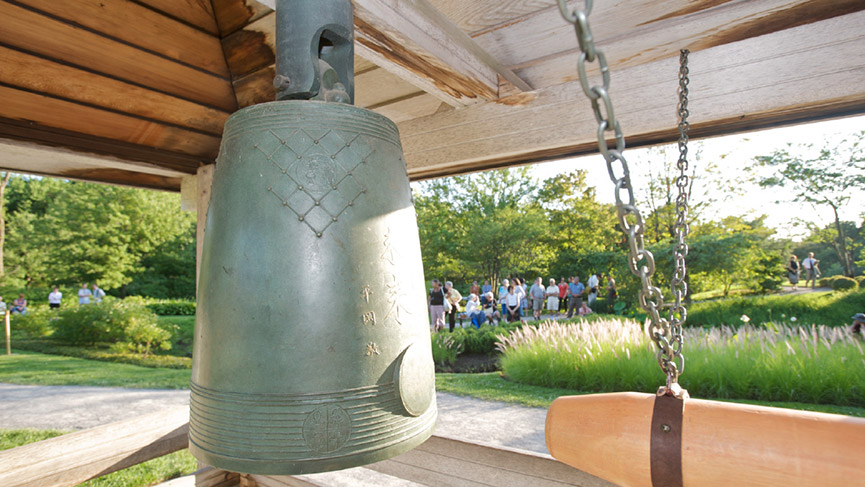 Sunday, August 5th marked the annual peace ceremony in memory of the victims of the 1945 nuclear bombing of Hiroshima, organized by the City of Montreal and the Japanese consulate, in the Japanese gardens of Montreal’s Botanical Gardens.

This year marks the 73rd anniversary of this bombing, and five students from schools in Hiroshima were special guests in attendance.  One of the students presented a message of peace; “the drops of water of our friendships and our humble acts of peace make up a lake; alone, these drops may seem insignificant, but together, they make all the difference.”

The Ceremony of Peace in memory of the victims of the bombing of Hiroshima, which has been an annual ritual in Montreal since 1998, aims to recall the importance of maintaining peace in the world.  The Peace Bell is a gift from the city of Hiroshima; in fact only five other cities possess Peace Bells: the first is at United Nations Headquarters, and the others are in Chongqing, China, Hanover, Germany, Honolulu, Hawaii, and Volgograd in Russia.

On August 9th, 2015, during the commemoration of the 70th anniversary of the atomic bombing of Japan, Pope Francis spoke of “the horror and the repulsion” aroused by this event of the Second World War, which he considers to be “the symbol of the inordinate destructive power of man when he misuses scientific and technological advances.”  While praying the Angelus the Pope called for, “saying no to war and yes to dialogue and peace.”  He invites us to work toward “the worldwide promotion of an attitude of fraternity and a climate of peaceful and serene coexistence between peoples.”