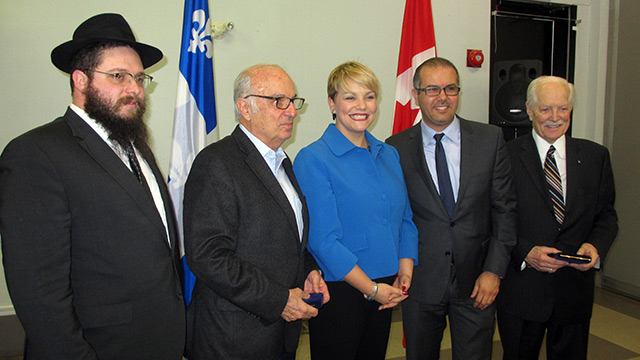 The Collectif pour l'Unité togheter with Minister Isabelle Melançon, Minister of Sustainable Development, the Environment and the Fight Against Climate Change.

"Collectif pour l'unité" received the Medal of the National Assembly at a ceremony held on Sunday, Dec. 10, crowning two years of action promoting harmonious coexistence among the Christian, Jewish and Muslim communities in Verdun.

This ceremony was held under the aegis of the Member for Verdun and Minister of Sustainable Development, the Environment and the Fight Against Climate Change, Isabelle Melançon. She wished to recognize and reward the action of Collectif pour l'unité, an interfaith association founded by Mr. Roger Légaré (under the guidance of Msgr. Roger Dufresne), from Sainte-Marguerite-Bourgeoys Church, Mr. Mourad Bendjennet, from the Al Jazira Islamic Center, and Rabbi Levi Itkin, from Chabad Nuns' Island, with the financial support of Mr. Samuel Gewurz.

Over the past two years, Collectif pour l'unité has distinguished itself through the achievement of several initiatives promoting interfaith dialogue. Firstly, in 2016, it organized the erection of a bell tower on Nuns' Island, which houses the "bells of unity," the purpose of which was to highlight what unites the Christian, Jewish and Muslim faiths.

Mr. Bendjennet wished to call attention to this in his acceptance speech: "We have demonstrated that it is possible to shape a better world thanks to togetherness, by focusing on what unites our three religions (love, sharing and generosity) and by setting aside what divides us."

Furthermore, this initiative has led the Verdun Borough to create Place de l'Unité, a square where the bell tower is located, to encourage this desire for peaceful coexistence and dialogue, which is the driving force behind Collectif pour l'unité.

Collectif pour l'unité then set itself apart when it opened a donation centre for Syrian refugees and sponsored a family of refugees from Syria.

This spirit of interfaith mutual assistance shows that there is a desire to come together in the name of a principle of humanity that transcends religious differences. Mr. Légaré emphasized this in his address: "Regardless of their religion, individuals need to unite to build something solid and prove to the world that they can work together.

Finally, Rabbi Itkin wished for this rewarding gesture to be made within the context of the Hanoucca celebrations beginning on December 12: "When there is darkness, let's light a candle, even if it is only one. It is a great beginning" before wishing Collectif pour l'unité to continue its work towards building a world where goodness and kindness can develop and flourish.

The ceremony came to a close with the song by Raymond Lévesque, "Quand les hommes vivront d'amour," which everyone in the room sang together.