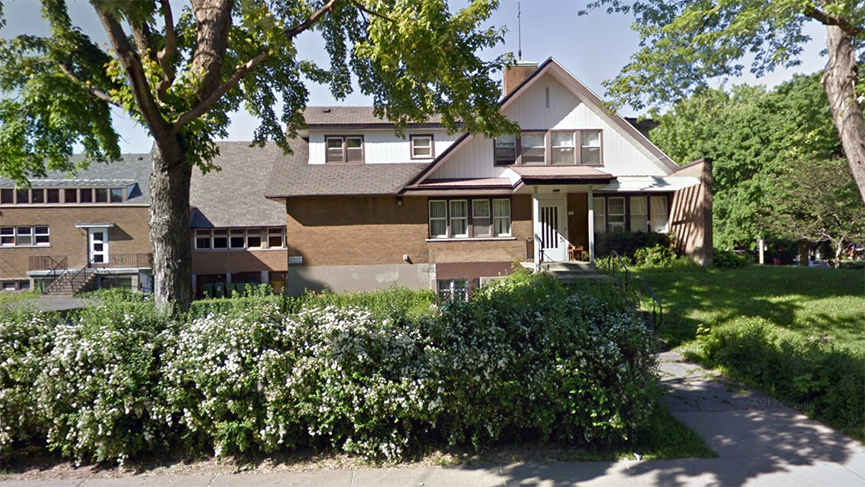 Located in the Church of Sainte-Louise-de-Marillac Presbytery, the Residence René Gagnon has eight rooms for ex-convicts who are back in society. (Photo : Tina Forero)

At the René Gagnon Day Centre in east end Montreal, former convicts overcome their first steps as they begin a new life after incarceration. Accompanied by Gérard Laverdure, coordinator of the organization since 2015, they learn to reconnect in social settings with their peers and members of the local community.

"When the guys return to society, they're pretty clueless. We help them find jobs, housing and insurance. We act as a foster family. René Gagnon, founder of the organization, was a prison chaplain. He was really touched by the guys when he realized what kind of life awaited them after serving sentence, said Mr. Laverdure.

Founded in 2006, the René Gagnon Day Centre welcomes ex-cons in the basement of the Sainte-Louise-de-Marillac Church Presbytery, where the upper floors are reserved for the René Gagnon residence. The residence includes eight rooms for ex-cons, who reintegrate into society.

"This is an important resource for ex-convicts, especially those who had to serve a long sentence behind bars." Their imprisonment caused the crumbling of their social ties, and sometimes even a complete break from the outside world. Isolation can lead to depression and committing crimes. But many received psychological or psychiatric care. And we have about 30 support groups on our premises. This results in a 90% non-recurrence rate among the participants, said the René Gagnon day Centre coordinator.

A Source of Hope

Every Monday and Wednesday, former inmates and users of Community correctional Centres (CCC)—prisons in the city, the last step before their reintegration into society—accompanied by parole officers, receive a heartwarming good meal. Volunteer cooks at the day Centre sometimes teach them a few hints for healthier eating.

However, the René Gagnon Day Centre offers more than just food, board games and quilting workshops. A "spiritual food" is also on the menu. "We try to relate each person to his spiritual dimension. We want to show him that his life is not over, that something better awaits him, and that the Word of God is an inexhaustible source, just like when Jesus met the Samaritan woman and invited her to drink at the source, thanks to which she would never thirst again," said one employee who studied theology and psychoeducation.

We also take advantage of Christmas and Easter to propose a sharing of the Word of God at the Sainte-Louise de Marillac Chapel. Attendance is voluntary, said the Catholic Christian, who will turn 75 next March.

"I really like the guys, I respect them and they can feel it. I'm not the boss; I think of them as my brothers. I love what I do. I will continue the mission as long as I can. I take it as a gift from God," he concluded.

Our Lady of Guadalupe, patroness of the Americas
Pope Francis: Good politics is at the service of peace

Pope Francis: Good politics is at the service of peace