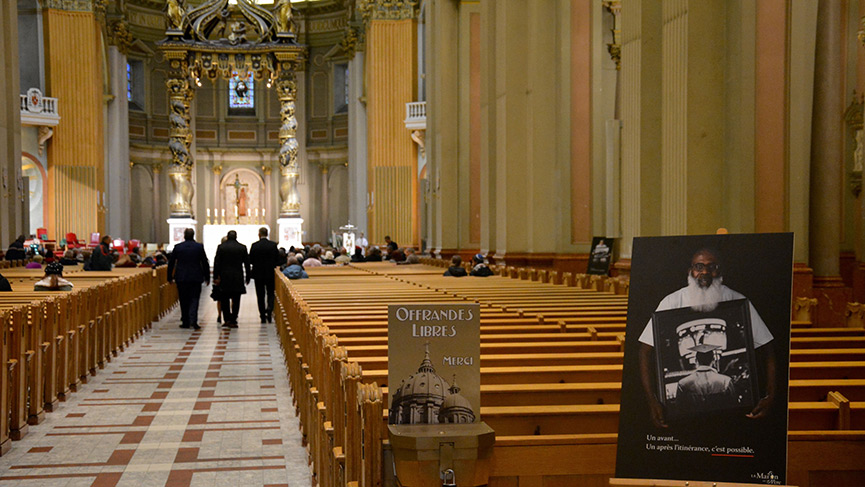 They came from all over, and from every background, like one big, happy family, to celebrate the 50th anniversary of Maison du Père at Queen Mary of the World Cathedral on Oct. 27. A Mass marked this great event, and fifty years of devotion and work “to offer a way out from the streets”…

“If I give away all my possessions […] but do not have love, I gain nothing” (1 Co 13: 3). St. Paul’s strong words touched the assembly gathered on Sunday, Oct. 27, to celebrate the 50th anniversary of Maison du Père.

François Boissy, President and CEO at Maison du Père, took the time, at the beginning of the celebration, to thank those who got involved over the past 50 years, so that the mission of Maison du Père could be upheld. His thanks were addressed to the Maison du Père’s 200 volunteers and 113 employees, the team supporting the work. As he said, he wishes “for the street to have an exit for the largest number of people.”

Blessed are those who listen

“The poor soul cried, and was heard by the Lord” (Ps 34:7). That verse was the introduction to Archbishop Christian Lépine’s homily. Recalling Pope Francis’s words, he said that “no one should believe that one’s cry is lost in the void.” “I give thanks to God for all of those who heard [that cry]”, as he invited the assembly to, “always listen for more” and to draw near to the poorest. Though material poverty is one of the battle grounds of Maison du Père, he also stressed the other types of poverty at the origin of a human cry. This cry his heard when someone opens the door to “meet the other in his or her profound suffering and to reintegrate him or her into society [until the individual] finds the strength to give back,” and is able to help in return, Archbishop Lépine said.

Giving back is exactly what Mike* did. In a short testimony, he shared in a touching manner how Maison du Père, and particularly “Father Marc,” helped him deal with substance abuse issues, as he was finding life hard to tolerate at the age 25. He found in them the face of “Jesus, arms wide open”: “[I understood] faith through works,” he said, with a profound gratitude. Now a technical training teacher at a CEGEP, he explained that he really got to experience giving back through a meeting he organized for his students with “the street guys” at Maison du Père.

A light and joyful meal followed the celebration, enabling people to mingle in a festive atmosphere.

For more information on Maison du Père and their work: https://www.maisondupere.org