Christians invited to join virtually in prayer for 54th Week of Prayer for Christian Unity
18-01-2021
Good news for humankind: Treaty on the Prohibition of Nuclear Weapons
13-01-2021
Growing Parish Vitality: Brett Powell on Leadership Where It Matters Most
13-01-2021
Choosing to Hope and Live
12-01-2021
Pope: World needs unity, fraternity to overcome current crisis
11-01-2021 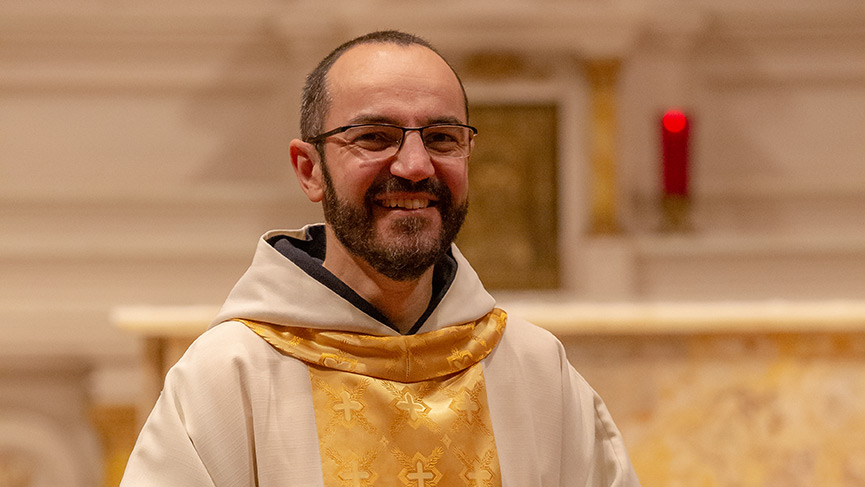 ‘The bread that I will give for the life of the world is my flesh.’ In the spirit of the Gospel according to John (6:51), the priestly ordination of Brother Pierre-Benoît of the Fraternité monastique de Jérusalem took place on November 14th.

For Brother Pierre-Benoît, ‘monk first,’ this is about his ‘identity being put into service in the ministry of the priesthood for the service of the community.’ He explains, ‘in the ordination, I was moved by this feeling of entering a lineage that goes beyond you, a lineage of service, of servants of the Church.’

‘There is one moment which is really quite powerful,’ says Brother Pierre-Benoît, ‘when the priests who are present lay their hands on your forehead. Actually, the feeling is that you are experiencing the apostolic transmission - meaning from Saint Peter: quite a long time ago – of service to the Church. I was thinking at the end, I feel small; here I am today in 2020, and so many have gone before me, and so many will come after me.’
Although he could hardly have imagined that the celebration would, thanks to Covid, be like this, he nonetheless felt ‘the presence of those who were not there,’ and who were following the event from wherever they were by live-stream.

Giving bread to those who hunger

The motto for his ordination is taken from Saint John (6:51). ‘That verse has stayed with me for several years. It is speaking about bread that is real and which gives real life to the world. I believe it is very relevant. At any rate, I have the perception that the world today is thirsting, hungering.’ In the heart of the activity on Mont-Royal, he senses this hunger. ‘I look at the signs of the times with optimism, but when I see people running everywhere, looking for something, I see a world that desires, that is thirsty and hungry, that is looking for the meaning of things.

We as Christians have keys that we possess, plenty enough to share with the world,’ he says. First listening, then speaking: this is the core of his work as priest.

Having entered the community in France in 2004, at the age of 24, he completed his initial training in Europe, before being sent to Montreal in 2008. Here he took his perpetual vows at the feast of All Saints in 2013. Over the last 12 years in Quebec, he has had the opportunity to take three years of training at the IFHIM (Institut de formation humaine intégrale de Montréal), which enabled him to ‘know himself better in order to be better able to give of himself.’ Thereafter, he completed his years of Seminary studies in Montreal and is now a priest. ‘I still can’t get over it!’ he exclaims with a laugh.

Even though he had already been in the community for several years, his experience of the liturgy is different now, since his ordination. ‘I’m in a different place behind the altar. Even if you’ve participated in the Mass hundreds of times, when you start saying the words of consecration, of the institution of the Eucharist: Wow! For a moment it takes my breath away, even if I’ve heard those words many, many, many times before.’ Reconciliations are also part of his new ministry, in addition to the spiritual accompaniment he has been involved in for some years.

Brother Pierre-Benoît and the other members of his community work every day, just like everybody else. Since September, he has been doing an internship at the CHUM as spiritual caregiver, in a secular setting, in a palliative care unit where his work involves ‘meeting and listening to the sick and the dying and their families.’ He reflects, ‘I think I pass on this hope, this joy that is in me […], letting this life show through that is in me.’ In conclusion, he sums up the essence of his vocation as brother and priest in the world as ‘a ministry of smiling and listening.’

Watch the priestly ordination of Brother Pierre-Benoît again at this link.