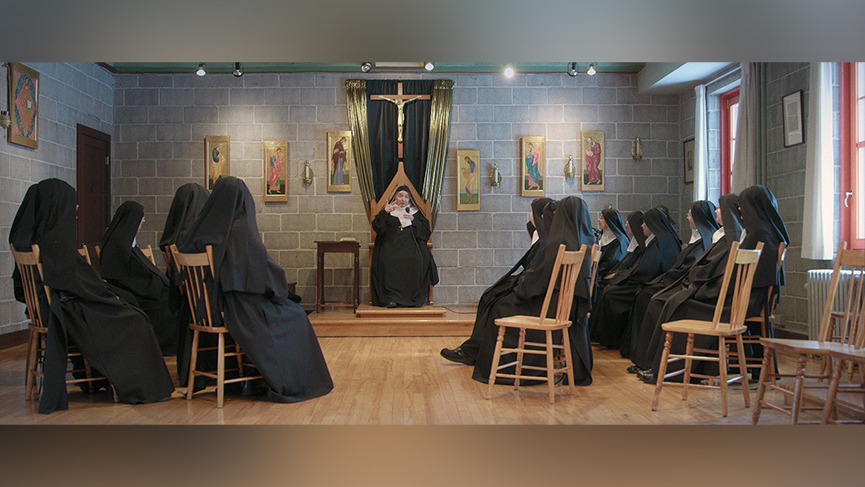 The documentary film De l'autre côté premiered on November 22 during the RIDM film festival in Montreal before an audience of 100 cinema-goers. With his documentary, director Lessandro Sócrates succeeds in bringing the viewer along to experience the inner world of the nuns of the Abbey of Sainte-Marie des Deux-Montagnes.

"We are delighted with the result. Lessandro has captured the meaning of our life. He really did discover it; in fact, he touched it.”
Sister Martine is seated in front of the food counters at the Quartier Latin Cinéplex Odeon as she relishes this time outside the walls of her abbey.
With her sits Sister Louise, who is very eager to try the popcorn with salt and butter. "Now we’re on the other side, after all,” she says, alluding to the film’s French title: De l’autre côté.

The cinema is quite busy this late evening. Dressed in their black and white habits, the nuns attract the glances of those hurrying by to make their movie on time. It is also very noisy, so we must huddle together in order to hear one another. Our group forms a bubble, impervious to the hustle and bustle around us. Little by little, a sense of intimacy envelops us.
Sister Martine explains to me that the nuns are very cautious about accepting an offer from a journalist or a filmmaker. "We are very careful. Normally, the only men who come into the monastery are the workers. We are even warier of the media, because they could just as easily make a mockery of us.”

The apprenticeship
Consequently, they took their time getting to know director Lessandro Sócrates. Due to technical and financial issues, the making of the film was drawn out over nine years. It was completed in 2021.
Before proposing the idea of making this documentary to them, he had met the nuns while making a film about a Russian iconographer who lives in Montreal.
"When he began his documentary, he knew nothing about us," recalls Sister Martine.
Although the sisters gave the director complete freedom, they nevertheless guided him in becoming acquainted with monastic life. “I was more or less the one who set the schedule,“ she continues. “I would say to him: 'Today we can do such and such.' For example, Mondays we do laundry, so he would come and see us there.”

"He often came to the sacristy. He wanted to know how I arranged the ornaments, how I prepared the monstrance, how I lit the candles. He found that very interesting!" remembers sacristan Sister Louise.
The residents of the monastery were not disturbed by the camera. "When he came to Mass, he would position himself in the back. We would not even be even aware he was there. He would take pictures and film as he wished," Sister Martine tells me.
Suddenly, Lessandro Sócrates appears at our table. The two nuns jump up to greet him. There follow long hugs and exclamations of joy. I hear Lessandro say several times, "It’s been so long!”
Right away, he tells about his first encounters with the nuns and the monastery. "I went there several times. I attended the services. I spoke with Sister Martine and Sister Louise. I went to the guesthouse, to the garden. During my first visit for the documentary on the Russian iconographer, I only went to see the icon workshop. It wasn’t until February 2014 that I started filming with my camera. We got to know each other."

The joy
That closeness can be felt throughout the film, and the absence of interviews or voice-overs even intensifies the feeling.
For Lessandro, this was a choice that went without saying. "The directors who make this kind of film are the ones I like the most. Also, I couldn't do narration. I couldn't claim to be able to write or say anything that would explain their lives, because I'm not a specialist in monastic life. I wanted to simply observe them. And when the nuns are talking with one another, there is still speech. They laugh, as well..."

Indeed, joy is everywhere in the documentary. According to Sister Martine, its presence is perfectly normal. "Joy is a gift of the Holy Spirit. Wherever God is, there is joy. He is all love and all joy. He wants us to be happy. When we are with Him, we can't help being joyful. The joy just happens all by itself!”

One of the final scenes in the film shows how contagious this joy is. After he films the sisters tobogganing down a hill, they encourage the director to come away from the camera and try it himself. He walks up, leaving the camera running, and has his very first toboggan ride, to the nuns’ cries of delight and encouragement and the amusement of the viewer.

Some of the nuns who appear in the documentary have since died. One of them, Sister Cécile, talks on screen to the director as he is filming her with her walker. "She was 98 years old at the time. She died at the age of 102," Lessandro says.
Sister Martine points out that the film’s premiere last Tuesday was also the liturgical feast day of Saint Cecilia, patron saint of musicians. "I'm sure it's a little wink from Sister Cecile!"

When we asked if the sisters had any regrets about letting Lessandro make his documentary, Sister Louise, who will soon be celebrating 59 years of religious life, exclaims without a moment’s hesitation, "Oh no!” which elicits a laugh all round.
The documentary De l'autre côté was shown again on Friday, November 25, at 6:00 p.m. at the Quartier Latin Cinéplex Odéon.

Biodiversity: where faith and ecology meet
Ahead of COP15...