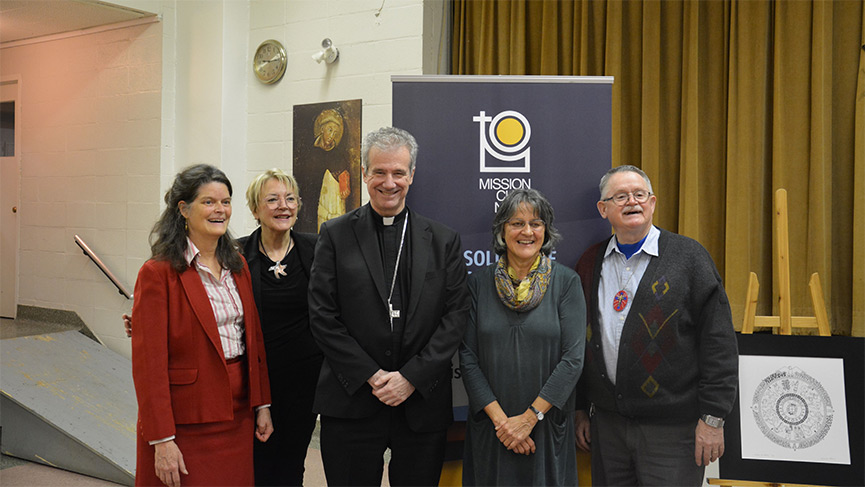 A conference addressing the Church’s presence in aboriginal communities, hosted exchanges, and featured two speakers who openly shared their experiences: Jacques Laliberté, O.M.I., and Rose-Anne Gosselin touched the hearts at the conference Mission chez nous with their testimonies, leaving participants captivated and inspired to meet any challenges that lie ahead.

On Oct. 23 was held the fundraising conference for the organization Mission chez nous. People responded to the invitation of Archbishop Christian Lépine, President of Mission chez nous. The goal of the conference, organized conjointly by Mission chez nous’s Director, Lucie Martineau, and by Social Action Ministry Office Director at the Archdiocese of Montreal, Louise Royer, was to provide a space for reconciliation and to deepen our knowledge on the treasures the Aboriginal Peoples of Canada can teach us, and to share thoughts on the mission during the Extraordinary Missionary Month. The two witnesses’ presentations generated interest from the audience and a strong desire to know better those with whom we share history.

As she presented the evening, Louise Royer quoted University Laval Prof. Pierre-René Côté, who compared the Atikamekw to the Hebrews in the Roman Empire, since this is a small, misunderstood nation.

One People, one Family

Jacques Laliberté, an Oblate, spent 24 years with the Atikamekw as a missionary. If hearing the word “missionary” seems pejorative to some people, for Jacques Laliberté it was at the heart of his calling to the priesthood, as he “wished to be at the service of remote indigenous communities.” At 37 years of age, he was sent to Wemotaci, one of the three reservations of the Nation Atikamekw. This was a huge challenge, as he came there with no knowledge of the culture and ways of this community. A year later, he was sent to Opitciwan and stayed there for 15 years. There were three of them alternating from parish to parish every three weeks between Wemotaci, Opiticiwan and later Manawan – three Atikamekw communities. “We went through four trucks in four years,” he recalled, describing the extreme road conditions and the huge distance this small team had to cover.

From the very beginning, Father Laliberté felt the desire to build a parish community in which everyone would get involved and where “Aboriginals would take full responsibility in the parish.” On a broader level, his wished to “become useless.” Seriously doubting any progression after three years, he focuses on training. Evenings devoted to prayer took place and Père Laliberté said that he experienced one of the most profound evenings in his life right there.

As groups kept gathering, the Atikamekw communities started being part of some dioceses. Each currently belongs to a different diocese. Father Laliberté’s affection for these people, he kept company with, was palpable.

Men and Women of Prayer

Rose-Anne Gosselin, from the Nation Anishnabe nation, is originally from Témiscamingue. Her mother was Anishnabe and her father, French-Canadian. She told us, however, that her faith comes from the “Algonquin women, [her mother] and [her] grandmother.” She shared the stories her grandmother told her on Christians, on the itinerant missions having a priest only a few times a year: “People did not have access to the sacraments, but to prayer,” she would say. Praying then filled the whole space, according to her, prayers that would “enliven faith.” “When I have the chance to pray with Aboriginals, it is still a very profound experience,” she added.

Rose-Anne Gosselin also said that, for her, moral values like sharing and mutual assistance found in the Christian faith are also very real and at the heart of the Aboriginal Peoples: “The Algonquin people subscribed to the Gospel because they felt they had affinities with it.”

Rose-Anne works currently for the Employment Integration Service of the Assembly of First Nations of Quebec and Labrador, in Kahnawake.

Are the poor suffering a loss of all hope ?
Pastoral team meetings focused on listening