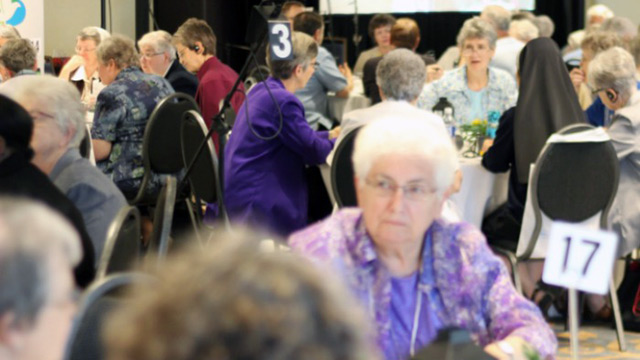 (Presence) About 250 leaders of congregations and religious institutes, the great majority of whom are women, participated this weekend in the 32nd General Assembly of the Canadian Religious Conference (CRC), held every two years.

The nights are pregnant. You who hold vigil, what do you say? , the theme of this meeting was developed by economist and theologian Elena Lasida, professor at the Institut catholique de Paris (Catholic University of Paris) and collaborator with the episcopal commission of Justice and Peace at the Conférence des évêques de France. (Conference of Bishops of France)

Beginning with Pope Frances' encyclical Laudato Si', she led a reflection about the ties between the Canadian religious context, sustainable development and the new economy that is taking place in the world.

Religious life in Canada today is in transition, says Timothy Scott, director general of the CRC, "In a less benevolent way, we also say it is in crisis".

He recalls that in 1954, at the foundation of this association which gathers together the superiors from present congregations, "there were no noviciates or juniorates big enough to take in all the postulants and candidates"

Today the CRC has 260 members, superiors of communities, who represent some 12 000 religious women and men.  A number that, because of mortality, diminishes by about 750 per year.  "For a number of institutes born in France in the 19th century, the next decade may be the last", he says.

During this night that religious life is journeying through, "our mission consists of searching for signs of hope and paths of possibility", signs and paths "that indicate that consecrated life will continue to be an integral part of the cultural and religious mosaic of Canada", states the director general of the CRC in the report he submitted to members at the beginning of the meeting.

The general assembly is also an occasion for the members of the CRC to vote for the directions to be taken by their associations for the next two years and to elect their representatives to the board of directors.