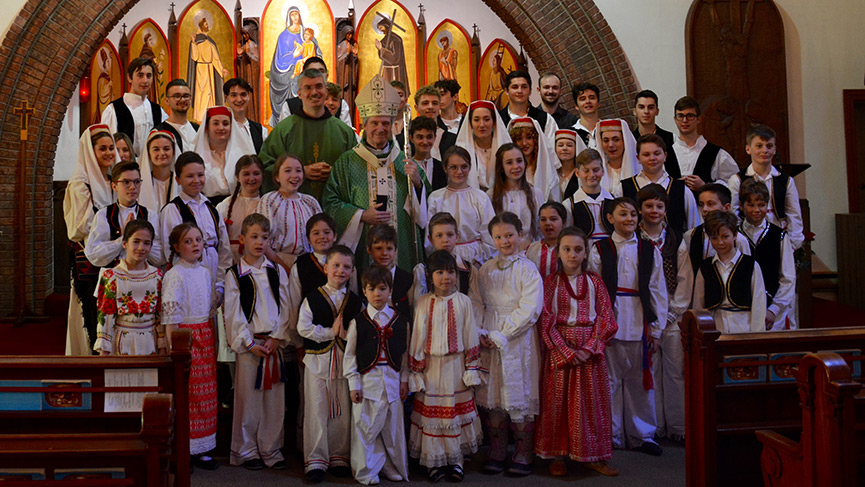 In the magnificent, sun-filled church of St. Nikola Tavelić, both young and old gathered in great numbers from the Montreal Croatian Catholic community. The atmosphere was a joyful one, with children and youth dressed in traditional costumes, as part of a special Mass held Sunday, Feb. 9, celebrating the feast of St. Nikola Tavelić.

It is in the St. Nikola Tavelić Catholic Church that the Montreal Croatian community gathered on Sunday, February 9, 2020, in honour of their patron saint, to attend a Mass celebrated in their own language, as they do every Sunday. The community had invited Archbishop Lépine to preside the feast of the Croatian Saint.

After the celebration, a meal was served in the church basement to extend the feast and to see a group of young people perform traditional dances, to the delight of everyone. The atmosphere was festive!

Being the Salt and the Light

Archbishop Lépine, quoting Matthew’s Gospel (Mt 5:13–16) reminded us that Christ’s words were addressed to us: “We are the salt of the earth by the way we live our faith.” We become the salt, he added in his own words, when we pray together, and support and love each other: “When we love, it becomes transformative and we go through a change […] It’s a fundamental path to be able to witness with Jesus Christ […] to live as his disciples.”

If we are the salt, we must spread it into the world, said the Archbishop: “You are being transformed by what you do […], and it helps you bring Christ into your school life and your work, regardless of where you go in society.”

But Sunday’s Gospel readings invited us to be also the light of the world: “At one point [St. Nikola Tavelić] said to himself: ‘I need to do more, to be a light in the world and to proclaim Jesus Christ with my life, but also through my words’”, said the Archbishop.

This holy martyr converted a lot of people and was executed for his faith in Jerusalem, in the year 1391. Nikola Tavelić is the first Croatian Saint canonized by Pope Paul VI, on June 21, 1970, in Rome.

The Archbishop recalled that we belong not only to the Catholic Church of Quebec or Canada, but to the Church throughout the world: “Our local Church is always a universal Church. [She] is present when we gather in Jesus Christ,” he said. “Christ’s love is not aimed at some individuals in particular or only at us, but at the whole of humanity for which he died,” he added.

Archbishop Lépine concluded by asking God and the Holy Spirit to grant us the grace to become, “bearing witness to those martyrs,” the salt of the earth, but also the light of the world by “proclaiming Jesus Christ’s name.”

The Montreal Croatian community gathers each year in the St. Nicola Tavelić Catholic Church to celebrate their patron saint.

February: the Pope calls us to pray for migrants and victims of trafficking
Anniversary masses to be held worldwide for Fr. Giussani and the Fraternity of Communion and Liberation (CL)

Anniversary masses to be held worldwide for Fr. Giussani and the Fraternity of Communion and Liberation (CL)