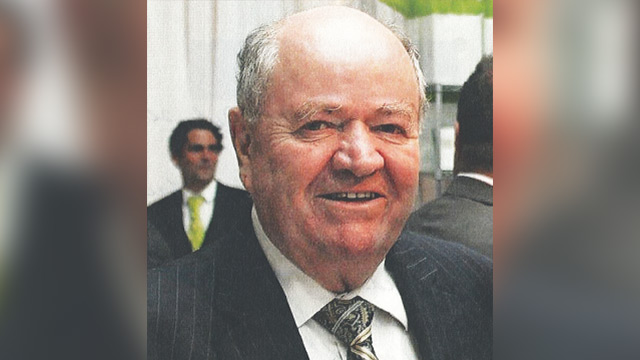 Fr. John Emmett Walsh marked his 50 years of priestly ministry May 22 with a double header. He celebrated a Mass of Thanksgiving attended by 500 at St. John Brébeuf Parish and launched his memoir, God Is Calling. Don’t Leave Him on Hold.

Known for his humanitarian initiatives and great passion for forging ties between interfaith communities, the former CJAD talk-show host was later fêted at Buffet Il Gabbiano by a diverse crowd of over 200 friends, colleagues, dignitaries and parishioners to celebrate this ministerial milestone.

Retired from "active" ministry since 2010, the 74-year-old pursues what he calls a busier life. "Retirement was hectic from the get-go," writes Walsh, describing numerous events, including memorable encounters with the Dalai Lama and Nobel Peace Prize laureate and Holocaust survivor the late Elie Weisel. Fr. Walsh has also cofounded the interfaith blog faithblender.com with Rabbi Chaim Steinmetz and Imam Dr. Zijad Delic.

An avid writer, Fr. Walsh contributes to Laval Families Magazine, The Suburban, The Metropolitain and Kateri Magazine. The Biblical scholar continues to preach weekends in Montreal parishes. Fr. Walsh's advocacy for different causes is reflected in his high-level involvement with a number of organizations. He currently serves as president of Communauté Nazareth Community Inc. and is a board member of both the Canadian Centre for Ecumenism and the Jewish Public Library.

Raised with his older sister, Marlene, in the Villeray neighbourhood, Fr. Walsh recalls a nurturing
family life, marked by the exceptional caring nature of both his mother, Margaret Quinlan, and father, Emmett Walsh. An altar boy in his home parish of Holy Family, he describes his early faith life as fully integrated into daily life, including grace before meals, and, as a family, reciting the rosary following Paul-Émile Cardinal Léger on the radio.

"Priests in the parish visited our home fairly often," recalls Walsh in his memoir. "My parents cared for people. They taught me priests were human beings who did religious things. Above all, they were human beings. So when I was about six, I told my parents I might want to be a priest. They bought me a miniature chalice and a paten and surprised me. With my cousin, Earle, we played in total innocence. The idea of becoming a priest receded as I grew older."

Influenced and inspired by his pastor, Fr. Walter Sutton, thoughts of becoming a priest returned at 15, and by 17, the teen was studying at P.E.I.'s St. Dunstan's University. "To choose the trek to priesthood came from the encouragement witnessed in the lives of priests," he recalls, "They taught us to be ourselves,"

He was ordained a priest May 21, 1966 at Mary Queen of the World Cathedral by Cardinal Léger and celebrated his first Mass at Holy Family Parish.

Among Walsh's extensive experience over half a century were chaplaincies at local high schools, police departments, and to the Christian Family and Montreal Cursillo movements. In 1978, Fr. Walsh set up and directed the Christian Training Program to help candidates prepare for the permanent diaconate or to serve in lay ministry. He also served as Assistant to Bishop Leonard Crowley at the Office for English-Language Affairs, Archdiocese of Montreal, from 1981 to 1986 and again, part-time from 1989 to 1994, while also serving part-time as Episcopal Vicar for English-speaking Catholics in the St. Jean-Longueuil Diocese until 1996. In 1998, Fr. Walsh was appointed pastor at St. Monica Parish and, three years later, at St. John Brébeuf Parish.

Having lived through five papacies, he describes our latest pope with great admiration. "Pope Francis is fearless when he speaks," writes Fr. Walsh. "He speaks from the Gospel. The church for Francis is a church of the poor for the poor...dirty, hurting and out in the streets."

Fifty years of ministry leads Fr. Walsh to conclude: "We are challenged to listen for the whisper of God everywhere. Our spiritual lives are the connectivity with all creation and the poor. Our mission is to work for justice...We can start wherever we are."

Pope Francis to Catechists: never tire of witnessing to Resurrection