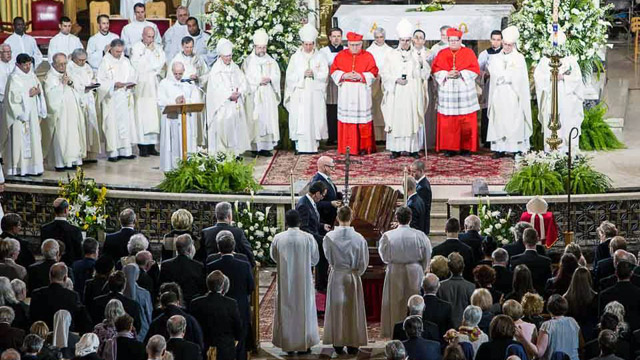 On April 17, more than 1,400 people assembled at Montreal's Mary Queen of the World Cathedral for the funeral of Jean-Claude Cardinal Turcotte, Archbishop Emeritus of the Archdiocese of Montreal, to pray for him and to pay him their last respects.

Among the government representatives, civilian dignitaries, religious people, and faithful, Quebec's former premier, Lucien Bouchard, was invited to give testimony of his friendship with this man who was "born into a modest family, one whose fundamental values were self-sacrifice and being there for each other."

Sr. Nicole Fournier, of the Sisters of Charity, also delivered a testimony of all the years that she had worked with the Cardinal, talking about his sense of humour, and the ease with which Cardinal Turcotte discouraged those who visited l'Accueil Bonneau from making too much use in their everyday language of the sacred objects of the church, which he referred to as "the tools in his tool box."

Most Reverend Anthony Mancini, Archbishop of Halifax and former Auxiliary Bishop of Montreal, friend of the Cardinal, made everybody in the assembly smile as he described the fond memories that Cardinal Turcotte had of their visit to his native village in Italy, during which he took part in conversations around the family dinner table with "ordinary" people - "a rare occurrence for him when he arrived in Rome!" exclaimed Most Rev. Mancini.

Everyone was moved when Archbishop Luigi Bonazzi, Apostolic Nuncio to Canada, described his last visit with the Cardinal, during the final stages of his illness: "We spoke for a bit, and near the end, I was inspired to ask him, "Your Eminence, is there anything you would like me to say to Pope Francis on your behalf?" A moment later, with a distinctive voice and a knowing look in his eyes, he said, "That I'm praying for him." Moved, Most Rev. Bonazzi concluded, "Before me, I saw a Christian, a bishop, who, visibly, was going through the final phase of his life fully aware that he was not going towards death, but towards the door that, from life, this present life, leads to Eternal Life."

During his homily, Most Reverend Lépine, Archbishop of Montreal, spoke of the Cardinal's motto: "Following the apostles, Cardinal Turcotte rooted himself in Christ and chose as his episcopal motto, 'Serve the Lord with Joy,' joy in the resurrection. At every stage of his life, he served the Lord by teaching people about Jesus and the values of the Gospel. Up to the end, Cardinal Turcotte wanted to celebrate the Eucharist, the presence of the living Christ."

A homily in the spirit of Easter and a ceremony marked with the joy of the resurrection... Yes, Jean-Claude Cardinal Turcotte, up until the very end, will have celebrated the Eucharist, presence of the Living Christ. Moreover, did our Cardinal not enter Eternal Life during the Octave of Easter?