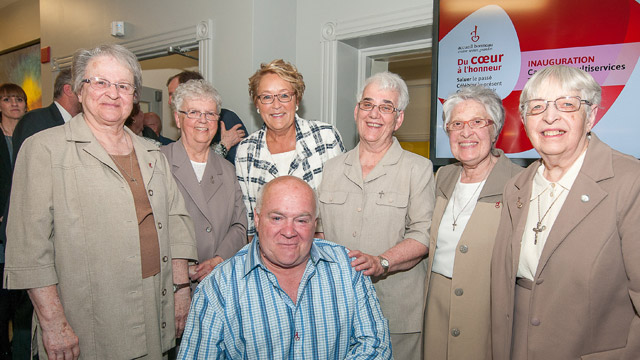 On May 7, Accueil Bonneau celebrated its 138th anniversary and inaugurated its new Carrefour multiservice by paying tribute to the Grey Nuns of Montreal, who have been putting their heart and soul into this shelter since its foundation in 1877.

Addressing special guests and partners, Mr. Aubin Boudreau, Accueil Bonneau's executive director, payed tribute to the Grey Nuns-some thirty of whom were present-for the exceptional heritage that these women have bequeathed to the Montreal community.

Delight could be seen in the eyes of every one of these sisters, during the unveiling of Hommage, a work of prodigious size expressing the Grey Nuns' love, compassion and commitment over all these years. It occupies the entire wall of the new Café des Sœurs, at the centre of Accueil Bonneau, and bears the names of the 253 sisters who have worked at Accueil Bonneau since 1877 - notably, the name of the famous Sr. Rose de Lima Bonneau, who, at the height of the economic crisis of 1931, served over 60,000 meals... which led the homeless of the times to say: "I'm going to Sister Bonneau's." Hence the name "Accueil Bonneau."

"We, the Grey Nuns, are very touched by this tribute," commented Sr. Jacqueline St-Yves, the congregation's superior. "The values that we have always striven to uphold are and will remain present in you, to ensure the longevity of this good work that helps every person that sets foot inside. The Montreal community will renew its love for Accueil Bonneau every year and support the organization as we have had the privilege of doing up to now."

The Grey Nuns then blessed everyone in the room with much emotion and sincerity. "They are leaving behind a spotless reputation and a strong legacy," added Geneviève Kieffer Després, executive assistant. "It is because of them that Accueil Bonneau has always been supported by the community in such a unique way."

The Carrefour multiservice now offers all the social reintegration services, making them more accessible and facilitating the provision of them to the homeless and those at risk of becoming homeless: podiatry, chiropractic, and a medical clinic complement the front-line services (showers, a clothing depot, and a dining room where 800 meals are served daily). There are new projects as well: urban beekeeping and an art workshop.

To make a donation, visit the Accueil Bonneau website or simply drop in "at Sister Bonneau's," at 427 De la Commune Street.