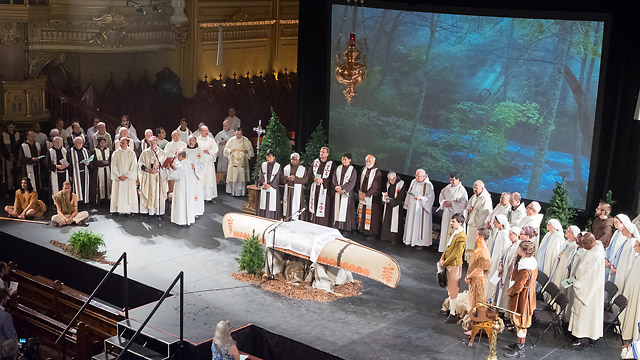 On June 24, 2015, on the feast of Saint John the Baptist, patron saint of French Canadians, more than 2000 people assembled at Saint-Jean-Baptiste Church, on Rachel Street in Montreal. They came to celebrate the 400th anniversary of the first Mass on the island of Montreal and the commemoration of the arrival of the Recollect Franciscans in America.

In fact, the first Recollects arrived on June 24, 1615, accompanied by Samuel de Champlain, some French colonists, and some Hurons. They disembarked on the shores of Rivière des Prairies, the Skawanoti (which means in Huron, "river behind the island").

In the choir of St-Jean-Baptiste Church, a giant screen took center stage. The film projected on it was of a man in a canoe, slowly paddling down a misty river, with the soothing sound of a loon singing in the background.

The assembly watched in silence. The canoe reached the shore, and suddenly, the actors took to the stage: Samuel de Champlain, the Hurons, the Recollects, and a few settlers, carrying a majestic canoe made of birch.

Speaking to Champlain, the Recollect fathers Denys Jamet and Joseph Le Caron began to describe the common features between the Christian and Aboriginal spiritualities: "Like us Christians, they believe that Earth was created by God, Whom they call 'Manitou.' There are many similarities between our beliefs."

Then, came the inspiration to celebrate holy Mass. They went on to do so aboard the canoe! Father Jamet asked the Huron chief to "purify the area and to drive the evil spirits away" with the "smoke from their sweet tabacco." The chief complied, noble and serene, by blowing smoke on everyone, slowly walking around the canoe. "There's nothing wrong with that!" said the Recollect priest.

This short theatrical performance about the arrival on the island of Montreal was touching. The assembly was visibly moved and excited. It was as though we were on the shores of the Skawanoti, with our ancestors, 400 years ago.

Once the chief had finished blowing smoke on the faithful and around the altar, Archbishop Christian Lépine and the entire entrance procession began to slowly make its way toward the choir to the music of La Bande FM and the Kahnawake Choir. More than twenty Franciscan brothers were included in the procession, as were the parish priest, Alain Mongeau, and several Plateau-Mont-Royal communities.

Most Rev. Lépine incensed the canoe, on which a wooden board covered with a white cloth had been placed. The relics of Saint Kateri Tekakwitha, the first canonized Amerindian, were under the board, along with those of Blessed Mother Marie-Catherine de Saint Augustin, one of the cofounders of the Canadian Church.

It had a seizing effect. We could recognize the talent of Father Robert Gendreau, a man who knows a lot about theatre, and director of the Archdiocese's Pastoral Liturgy Service.

Most Rev. Lépine delivered an exceptional homily: a 20-minute history lesson. "We say that we know our history well, but no one knew that the first Mass was celebrated on June 24, 1615. The second Mass was celebrated in Quebec City on June 25 by two other Recollects... Montreal is therefore slightly in the lead," he said with humour.

"Not everything about Samuel de Champlain is common knowledge. Did you know that he brought the Recollects here to ensure a spiritual presence? For this great explorer, spiritual life and exploration went together. Everything was connected. They were inseparable. In the "Relations des Jésuites," it is written that Champlain would have the lives of the saints read to him in the evenings, and that he would then pray. We cannot retrace the history of Canada, of Quebec, or of Montreal, without retracing his spirituality. It would be impossible and only half true, half historical."

The assembly broke out into a thunderous round of applause... and then realized, amusedly, that the Eucharistic celebration was still in progress.

Following the Mass, Most Rev. Lépine moved to the church's parvis and remained there for almost an hour, shaking hands with the faithful and being included in a slew of selfies to the rock music of "Terre Promise," which was fully set up on the parvis.

That's when the Mayor of Montreal, Denis Coderre, arrived and joined Archbishop Lépine: "I was unable to attend the Mass, but I wanted to greet our Archbishop in a show of solidarity. It's a celebration, and this Mass is an event that brings people together. We are celebrating our identity, and our spirituality as well," he said.

Several politicians were present, notably Luc Ferrandez, Mayor of the Plateau-Mont-Royal borough: "400 years of Saint Jean warrants a celebration! The sky was Quebec bleu this morning, on the most beautiful day of the year, in the most beautiful church in Montreal! I adore Father Mongeau. In my opinion, he is not only a priest, but also a very active member of our community. He said to me, 'I want you to attend! That's an order!' And I follow the orders my priest gives me!" he said, laughing.

Stéphane Dion, Member of Parliament for Saint-Laurent, was also present: "The first Mass was celebrated on the shores of the Rivière-des-Prairies, and I represent Cartierville-Ahuntsic; I therefore feel that it is my historic responsibility to be here. It is a great honour and a pleasure."

Actors from the Centre étudiant Benoît-Lacroix played the roles of the Amerindians and the settlers. Mario Bard, a journalist and actor who is well known in Quebec's Catholic community, gave a divine performance as Samuel de Champlain, even though, prior to going on stage, he had admitted to feeling a little "awkward": "He was a man about whom we know little. There were many sides to him. He was much closer to the Aboriginals than we could imagine, and regarded the Aboriginal culture with much respect. That really impressed me."

Mario Bard was recruited by Violaine Paradis, a CND sister, actress and comedienne. Thirty minutes before the performance, in the sacristy, Sister Violaine was sewing the finishing touches on a brown habit for one of the Recollects. She was a sight to behold, and she certainly did not have time to talk.

"Violaine is my pillar, my inspiration," said Father Robert Gendreau, director of the historical performance. I don't know how I would have done it without her. The set, the costumes, the spirit...it's all thanks to her!"

"Saint John the Baptist preached in the desert. I really love this image. There weren't many people where he preached... but he had a sweeping posterity, a certain fruitfulness. He is the patron of the mission, of our mission here on Rachel Street, and of Quebec's mission. He received the heritage of an old testament and turned it into something new. He welcomed the newness, and acknowledged it. Like a ferryman, he brought us safely over to the other side. Perhaps this is our mission today."