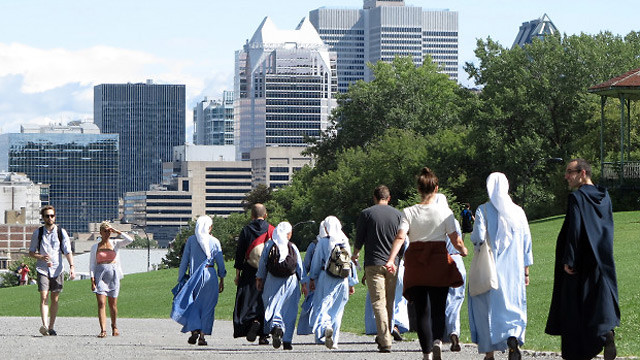 Year of the Consecrated Life 2015

The Year of Consecrated Life will officially begin on November 30, 2014. The following is a message from Msgr. Michel Parent, Vicar General of the Archdiocese of Montreal.

At the approaching outset of the Year of Consecrated Life, which will be on the first Sunday of Advent (November 30, 2014), it gives me great joy to welcome with you this gift of a "favourable time" and to thank the Lord, who, through His Vicar on Earth, recognizes the merit of the people who have dedicated their lives entirely to the coming of His Kingdom and to the service of His beloved children, including the most destitute.

My heart is filled with recognition for the immense work that has been accomplished by the people of consecrated life. They have contributed greatly in building Quebec, Canada, and, in particular, the Archdiocese of Montreal. I would like to pay special tribute to the communities that came from abroad, especially those from France, and also to the numerous groups of consecrated life founded in Quebec and, in particular, in Montreal. Let us be faithful, and trust in the Holy Spirit, who bestowed many charisms on our founders. Following in their footsteps and in the same spirit, let us open our doors wide and share these charisms with the many lay people who will be enriching this spiritual heritage that is both precious for the future generations and crucial to our ecclesiastical mission.

Closer to us, especially since the Second Vatican Council, our religious communities have been able to become more contemporary and adjust to the needs of modern times in a world of fast and constant change, in an increasingly secular world that still continues to search for meaning and spirituality, at times without even knowing it. I thank you for finding the way to transmit the gospel message, which remains current and new, to every generation.

And what can be said about all the groups of institutes of consecrated life that are sprouting in our modern times, of our secular institutes, our societies of apostolic life, of the Order of Virgins and of all the new communities following Jesus and his Gospel? The Holy Spirit breathes life into our Church. We should not doubt his life-giving action. Despite many problems, as much on a local scale as on a global one, we should look to the future with boldness and hope, remembering that Jesus is always with us, even if at times he seems to be asleep in his boat.

2015 marks the 50th anniversary of the Decree Perfectae Caritatis. This anniversary will fit perfectly within the context of the Year of Consecrated Life, and will surely provide inspiration for many organisers. Consequently, a convention will be held at the Lateran Palace on this conciliar decree. Would this not be a wonderful opportunity for us to study this document more closely, as well as Vita Consecrata, given to us by Pope Saint John Paul II?

Please look upon the present with courage and boldness, with confidence in the One who can do anything, who guides everything, and who sanctifies us.

HAVE A WONDERFUL YEAR OF CONSECRATED LIFE!

Spiritual Retreat Day for all Catechists
Only One Church, West Island Churches Hear