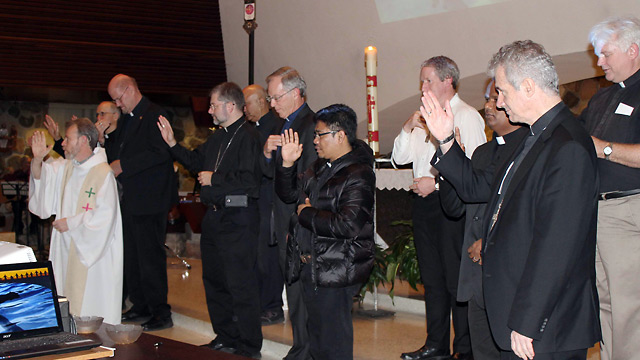 About 250 people attended all or part of a three-day ecumenical mission, drawing parishioners from about six denominations. Fr. Thomas Ryan from Washington, D.C., and Rev. John Armstrong from Chicago jointly preached the four sessions, held Oct. 25-27.

Half a dozen Christian denominations, three days, two preachers, one faith gave Christians in the West Island a glimpse of what Jesus meant when he prayed “that they may all be one.”

Ryan is director of the Paulist Office for Ecumenical and Interfaith Relations, and Armstrong runs the ACT3 Network, an ecumenical support network, forming partnerships for those in ministry.

Armstrong, a Christian Reform minister, asked the assembly: "Have you ever seen a grown man begin to weep when he confessed during a church liturgy that he believed in 'one, holy, catholic Church'?"

It was an epiphany for Armstrong, realizing that, although Christian denominations are divided, together they form the one Church established by Jesus Christ. That realization in 1994 led the evangelical pastor to dedicate his life to advancing Christian unity.

"There really is only one Church, divided as it is sadly, tragically," he told the assembly. "And Jesus prays for its oneness in both Spirit and practice."

The mission presented four themes, encouraging parishioners to accept the Gospel call to unity, to be an ambassador of reconciliation, to recognize the unique gifts of other Christian traditions, and to go forth as reconcilers.

Armstrong recalled a phrase that Francis Cardinal George, the archbishop of Chicago, used during an ecumenical meeting he had organized: "The Church of Jesus Christ does not have a mission," rather "the mission of Jesus Christ has a Church."

To live as one Church, amid the backdrop of mistrust and division, requires new thinking and fresh perspectives, Ryan proposed.

For his part, Armstrong urged his listeners to adopt a missionary view.
"All of our respective churches are outposts of that one great spiritual reality, which is the Kingdom, formed by the Good News of Christ," he suggested. Because of our baptism, all of us "carry the same passport of the same spiritual kingdom," regardless of the denomination to which we belong, he underlined

For Deacon Brian Cordeiro, it is mission accomplished. The organizer and parishioner of St. Luc/Luke Parish reported that 40 church leaders, representing the denominations sponsoring the mission, met Oct. 28 to consider practical ways to foster Christian unity.

The representatives learned that various denominations in the north end of the West Island offer similar pastoral services, such as meditation, pastoral home visitation and community outreach. The leaders agreed to meet again Nov. 6 to set up a program for collaborating in ministry.

Cordeiro said the mission was organized to stimulate ecumenical action at the local level, given that on Nov. 21 the Catholic Church will mark the 50th anniversary of the Decree on Ecumenism. The event also marked the golden jubilee of the parish of St. Luc/Luke, where the first two sessions were held.

Message for the Year of Consecrated Life
YOUCAT Sessions are back

YOUCAT Sessions are back