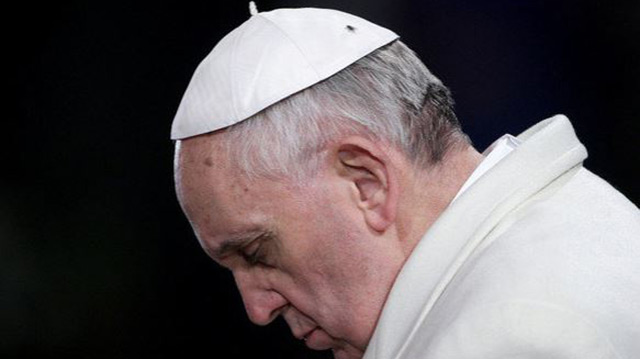 (Vatican Radio) Pope Francis on Wednesday asked forgiveness for scandals that have taken place in the Church and here in the Vatican.

He also mentioned recent corruption scandals that have rocked the city of Rome and its municipal administration.

He was speaking to the faithful gathered in St. Peter's Square before beginning his weekly catechesis.

Commenting on today's reading in which Jesus says "Woe to the world because of scandals. For if must needs be that scandals come: but nevertheless woe to that man by whom the scandal cometh".

And continuing his catechesis on the family he said we must consider the promises we make to our children when we bring them into the world.

The Pope said the greatest promise we make is love and he pointed out that every child trusts that he or she will be loved and cared for.

When that promise is broken, Pope Francis said, the result is a "scandal" which Jesus condemns, telling us that their angels in heaven stand in God's presence (Mt 18:10).

Pope Francis continued his catechesis saying that the Church too, through Baptism, makes promises to our children.

He said that in experiencing human love, each child comes to sense the presence of a God who loves children, and he urged all parents and care-givers to foster this mysterious relationship by leaving room for God in their young lives.

The Pope ended his address to the faithful in the Square with a reminder that next Saturday, October 17, is the United Nations International Day for the Eradication of Poverty.

He mentioned that the World Day aims to promote increased efforts to eradicate extreme poverty and discrimination, and to uphold the basic rights of all persons.

"We are all invited - he said - to make this intention our own, so that Christ's charity may reach and uplift our poorest and most abandoned brothers and sisters".

New Associate Director
"What if We Could Serve the Family First..."

"What if We Could Serve the Family First..."