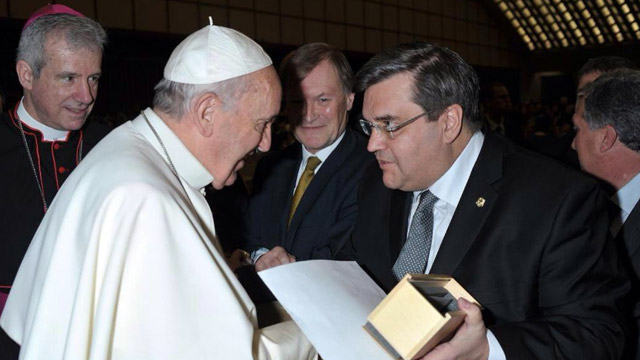 Archbishop Lépine and the Mayor of Montreal, Mr. Denis Coderre, took part in Pope Francis’ general audience in Rome this morning. Their aim was to invite the Holy Father to Montreal in 2017 for the celebration of the city’s 375th anniversary.

Before his departure for Rome, Archbishop Lépine recalled that the city of Montreal was founded as a missionary initiative. Most Rev. Lépine also stated that the city was initially named Ville-Marie and held this name for two decades before being renamed Montreal.

The 375th anniversary will be an ideal moment to highlight the spiritual dimension of the city's origins and history. The Archbishop is enthusiastic about the opportunity this anniversary offers to give new momentum to evangelization.

However, the Mayor of Montreal and the Archbishop will have to patiently wait and hope for Pope Francis' response.

February 11: World Day of the Sick
Prayer and Awareness against Human Trafficking

Prayer and Awareness against Human Trafficking