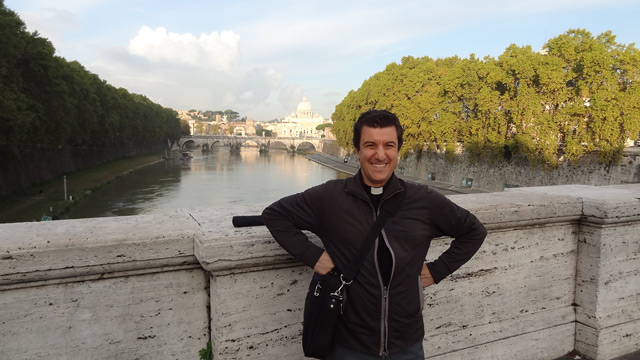 Montreal's next canon lawyer says his studies in Rome have allowed him “direct access to the legal minds of the Church”.

Fr. Francesco Giordano began his three-year licentiate in canon law at the Pontifical Gregorian University in October 2012, four years after ordination. He has one year to go and is in the process of refining his thesis topic, which will focus on Church law and the parish as community.

"Since canon law is linked to the Roman Curia, being in Rome allows you to get into the Roman mindset and see how they deal with issues," he said. "You just can't lift that from a book."

The 42-year-old priest has visited various pontifical congregations and the tribunals in Rome and said he appreciates "being close to the source of canon law" during this time of study.

"Your professors are actually the people who had a hand in drafting important Church documents," he said.

Fr. Giordano was born in an Italian-Canadian family and raised in Ste-Dorothée Parish, located north of Montreal. He described his canon law program, with 150 students from every continent, as "a United Nations of sorts".

And with St. Peter's Square less than a 10-minute walk away, he has also participated in the occasional papal audience. Watching how Pope Francis interacts with the crowds has brought home how the papacy "is a sign of unity that holds the Church together," he said.

His time in Rome has also allowed him to develop a greater sensibility to the tradition of the Church, he added.

"It's all around you," he said. "Culture has a very long memory and it is formative. It's not just an education I'm receiving through books but through immersion."

Upon his return to Montreal, Fr. Giordano expects a heavy workload. In addition to assignments in the chancery office and tribunal, he expects to have weekend parish ministry "and perhaps teach canon law at the seminary in some capacity," he said.