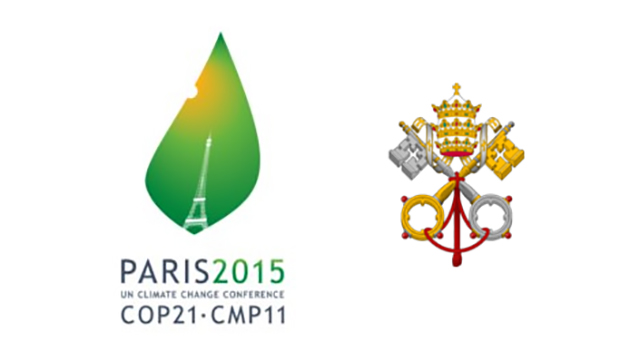 (Radio-Vatican) Cardinal Secretary of State Pietro Parolin spoke at the opening of the 21st Conference of States Parties to the Convention COP 21, held in Paris from 30 November to December 11.

After communicating Pope Francis' greetings and encouragement to the the participants in the hope of a fruitful outcome, the Cardinal mentioned the Holy Father's address to the United Nations Office at Nairobi on 26 November, when he expressed his hope that the Paris conference result in the adoption of a "global and transformational" agreement, based on the principles of solidarity, justice, equality and participation, orientated towards the attainment of three complex and interdependent objectives: mitigating the effects of climate change, combating poverty, and promoting the dignity of the human person.

He went on to list the three pillars of this "global and transformational" agreement. "The first consists in the adoption of a clear ethical orientation, inspiring the motivations and aims of the Agreement to be implemented. We are well aware that the people most vulnerable to the impact of the phenomenon of climate change are the poorest and future generations, who suffer the gravest consequences, often without bearing any responsibility. ... Faced with the urgency of a situation that requires the broadest collaboration possible so as to reach a common plan, it is important that this Agreement be focused on the recognition both of the ethical imperative to act in a context of global solidarity, and of the common but differentiated responsibilities of all actors in accordance with their respective capacities and conditions".

"The second pillar regards the fact that the Agreement should not only identify the methods for its implementation, but should also and above all transmit clear signs to guide the behaviour of all the actors involved, beginning with governments, but also local authorities, the world of business, the scientific community and civil society. ... This necessitates undertaking with conviction the road towards a low-carbon economy and full human development. ... In this regard, the countries with greater resources and capacities should set a good example, contributing resources to those countries in greater need so as to promote sustainable development policies and programmes. For instance, the promotion of renewable energy and dematerialisation, as well as the development of energy efficiency, come to mind, or the correct management of forests, transport and waste; the development of a circular model for the economy; the implementation of appropriate, sustainable and diversified programmes for food safety and to combat food waste; strategies against speculation and ineffective or indeed at times harmful subsidies; and the development and transfer of suitable technologies".

The third and final pillar is the vision of the future. "COP 21 is not a moment of arrival or a starting point, but rather a crucial path in a process that without doubt will not end in 2015", emphasised Cardinal Parolin. "An agreement with a long term perspective of this type should provide for processes for the revision of commitments and transparent, effective and dynamic follow-ups, able to progressively increase the level of ambition, as well as to guarantee suitable control. Furthermore, it is necessary to take into serious consideration the implementation of sustainable models of production and consumption, new attitudes, and new lifestyles. Here we enter the fundamental fields of education and training, unfortunately often situated at the margins of negotiations for international agreements. Technical solutions are necessary, but they are not enough if they do not consider education in sustainable life styles and responsible awareness".