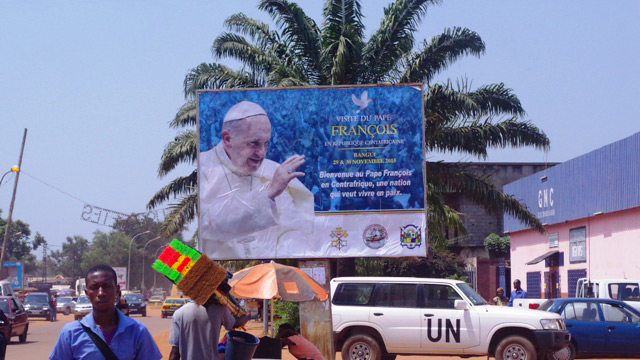 (Vatican Radio) In his weekly general audience, Pope Francis told those present about his recent trip to Africa and spoke about the importance of missionary work.

Speaking in St Peter's Square on Wednesday morning, he emphasized the value of living one's life in the way of Christ by helping others.

The Holy Father began his catechesis by thanking God for enabling him to travel to Africa. He expressed his "heartfelt" thanks to all those who had helped organize the trip.

Pope Francis first spoke about Nairobi, the biggest city in Western Africa, where "wealth and poverty live side by side". He said "this is a scandal!... the coexistence of wealth and poverty is a scandal, a true disgrace to humanity". He said he had encouraged the diplomats, religious leaders and young people to "treasure their country's natural and spiritual riches: from the earth's natural resources to the new generations".

The Holy Father expressed joy at having been able to proclaim Christ's message of hope: "Be steadfast in your faith, do not be afraid".

Reflecting on his visit to Uganda, Pope Francis spoke about the Ugandan martyrs, who had been canonized by Paul VI fifty years ago.

On the final leg of his journey, Pope Francis went to the Central African Republic, "the heart of Africa". The Pope said it was his primary intention to visit CAR, since it is a country emerging from a very difficult period, characterized by violence and suffering. This is why, he explained, he began the Jubilee Year of Mercy in Bangui.

The Holy Father concluded with a personal anecdote.  He spoke of his meeting with an 81 year-old sister, who had lived in Bangui since she was 23. He recalled her story: "I am a nurse; I studied a bit here and became a midwife and I have delivered 3,280 babies". "This is what missionaries are like: brave", said the Pope. He addressed the young members of the congregation saying "Please do not write off the possibility of becoming a missionary, of spreading love, humanity and faith in other countries".

Reach a global and transformational agreement