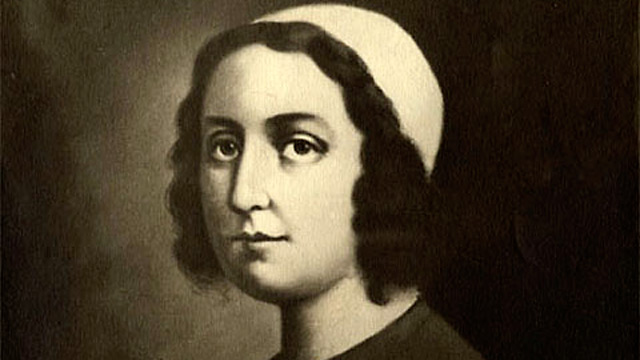 Following the announcement of the Venerability of Jeanne Mance, Archbishop of Montreal, Most Rev. Christian Lépine, wrote a message to the faithful of the diocese.

The same Jeanne that we know of and had adopted long ago as one of our own, even though she had come from Langres, across the ocean, in the Champagne region.

The second child in a family of 12, she took it upon herself to care for her siblings. Following her father's death, in 1635, she found herself available to respond to a special vocation that awakened in her, which led her away from home despite there being several women's religious communities in Langres. It must have taken a lot of courage to respond to this vocation that called to her so profoundly: to bring the Good News of Jesus Christ to Aboriginal people and to care for the sick. She was already putting her nursing skills to use on the ship, providing care to the crew during the crossing.

She was among the first group of settlers that founded Ville-Marie, building some houses there, and clearing the land. From the very beginnings in 1642, Jeanne Mance took people in. She spoke to them about God, and provided them with medical and spiritual care. She spent her entire life in the service of her brothers and sisters. Drawing her strength from daily prayer and an occasional piece of spiritual literature, she was preparing herself, in her heart and soul, to also become a "Servant of God."

She founded the Hôtel-Dieu Hospital. She oversaw the initial construction of this residence whose doors were open to the sick, Amerindian as well as French.

Although Jeanne herself had never become a member of a religious community, she invited the Religious Hospitallers of Saint Joseph from La Flèche to join her in 1659. The community had been founded there in 1636 by Jérôme Le Royer de la Dauversière and Marie La Ferre. With the support of this community, and despite a rocky start, Jeanne's good work took wing.

Those were heroic times that required the practice of heroic virtues.

This is what Pope Francis was acknowledging on Saturday, November 8, 2014, in signing the decree that recognizes her heroic virtues. The fact that one of our founders has been recognized for her fortitude and spiritual values brings us great joy! On that Saturday morning, the resonating sound of the tam-tams, one that Jeanne Mance had become accustomed to, was heard by many, reaching not only the Religious Hospitallers of Saint Joseph but also our friends all the way in Langres.

A vast network comprised of a unique social fabric shared its joy and offered its prayer of thanksgiving. Why such pride? Because Jeanne Mance was firstly a woman of faith and charity who had built her life on God's solid foundation. Also, because Jeanne Mance was a woman who bravely served others, welcoming them with respect and compassion. We are proud of her, one of our founders, and it was with great pride that we learned of this act of recognition signed by Pope Francis.

Jeanne Mance has been recognized as venerable. This is one step. There are talks of her potential beatification, and then canonization. It has been reaffirmed that, in keeping with the norms, her intercession would have to be witnessed through a miracle. But there is no need to wait for a miracle to pray to God through Jeanne Mance's intercession!

We can also express our gratitude to the religious women that helped her perform her good work in the heart of the city that is now Montreal. We can pay them a visit at the Musée des Hospitalières, on Pine Avenue, near St. Urbain Street. We can go to their chapel at the end of Sainte-Famille Street and celebrate Mass with them. Yes, Jeanne Mance's good work is still carried on today, thanks to the charism of the Religious Hospitallers of Saint Joseph.

For all of this, which is a source of inspiration to us, we give thanks to God.

Pope Francis To Visit Philadephia in 2015