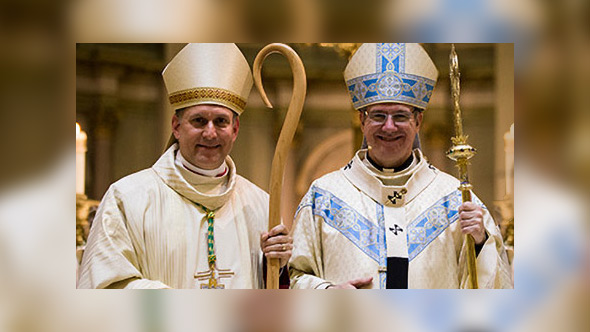 Most Reverend Christian Lépine, Archbishop of Montreal since 2012, is the pastor of the Church of Montreal. He is supported in his mission by one auxiliary bishop, Alain Faubert.

Born in Montreal on April 4, 1965, Alain Faubert grew up in Laval, in Saint-Sylvain Parish. While studying at Collège Laval, under the direction of the Marist Brothers, Faubert experienced a spiritual awakening around age 14.

After completing studies at the Grand Séminaire de Montréal, a diaconal internship at Saint-Urbain Parish, and a master's degree in pastoral studies at Université de Montréal, he was ordained a diocesan priest for the Church of Montreal on June 9, 1995. He was then appointed curate at Sainte-Dorothée Parish, before beginning full-time doctoral studies in ecclesiology at Institut catholique de Paris and at Université Laval in Quebec City. His thesis, defended in August 2010, examined the presidential dimension of the pastoral ministry of bishops and priests.

Upon returning from studies in 2004, Alain Faubert was appointed curate for the parish cluster in Outremont (Montreal) comprising three parishes, and Assistant to the Director of the Diocesan Office for Faith Education.  He then became Assistant for the Catechumenate Service, after which he was named Assistant to the Vicar General. From 2004 to 2010, he also co-hosted Parole et Vie, a television magazine show that examined the contemporary search for spiritual and religious meaning from various perspectives. He also taught ecclesiology and the theology of ministry at Institut de formation théologique de Montréal.

In January 2011, he was appointed Episcopal Vicar of the eastern region of the Archdiocese of Montreal. In May of the same year, he was named a Chaplain of His Holiness (Monsignor). Pastor of Saint-Germain Parish in Outremont since September 2012, Alain Faubert was appointed an Auxiliary Bishop of Montreal, Titular Bishop of Vicus Pacati, by His Holiness Pope Francis on April 19, 2016.

Since September 1, 2016, Bishop Faubert has been vicar general for pastoral and missionary affairs for the Archdiocese of Montreal. 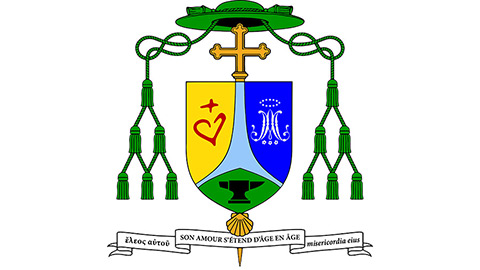 A heart surmounted by a cross is the symbol of the "Jesus Caritas" fraternities. Rooted in the spirituality of Blessed Charles de Foucauld, Bishop Faubert has been a fraternity member since his seminary days. The "life of Nazareth," the preferential option for the poor, contemplation in action, and following in the footsteps of Christ and Brother Charles: all are defining elements of his personal spirituality and his pastoral approach.

The "M" crowned with stars symbolizes the Virgin Mary and the Marists. It represents Bishop Faubert's attachment to the Marist movement and the spirituality of its founder, St. Marcellin Champagnat. The three violets below it denote the "little virtues" that Marcellin espoused: humility, simplicity and modesty.

The "celestial" blue stream that flows from the cross is a symbol of Baptism, the source of everything. It also represents the Petite-Nation River, which runs through the Fauberts' ancestral region in the Outaouais. The river gives shape to a mountain, the village of Montpellier. The anvil depicts the blacksmith trade, which Florimond, Bishop Faubert's grandfather, practiced there.

The colours of the coat of arms are emblematic of the three theological virtues: azure (Faith), green (Hope), gold and red (Divine Glory, through Love and the Cross).

The seashell signifies the Camino of Santiago, on which Bishop Faubert journeyed as a pilgrim and as a brother to all seeking God.

Bishop Faubert's motto, "Son amour s'étend d'âge en âge "(His love extends from generation to generation), is drawn from the Magnificat (Lk 1: 50), which Mary sang when visiting her cousin Elizabeth (The Visitation). It encapsulates the heart of the Gospel: the Lord's invincible love. Contemplating and welcoming this love must remain the first priority throughout our lives. The Greek text and the Latin translation of the first words of the motto draw attention to the nature of the Lord's faithful love: it is merciful. This recalls the Jubilee Year of Mercy, during which Bishop Faubert received his episcopal ordination. Greek and Latin also call to mind our scriptural roots and the universality of the faith.

Finally, the green six-tasselled ecclesiastical hat and the gold Latin cross are the traditional symbols of episcopal ministry. 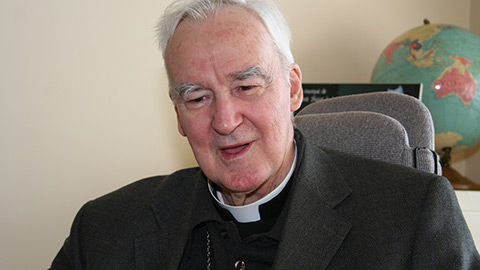 Jude Saint-Antoine was born in Montreal on October 29, 1930.  He attended the parish school of the Sisters of Jésus-Marie and the brothers of the écoles chrétiennes de Maisonneuve. He continued his secondary education at l’Externat classique Sainte-Croix and at collège l’Assomption. After completing his theological formation at the Grand Séminaire de Montréal, he received his priestly ordination from Cardinal Paul-Émile Léger on May 31, 1956 at the parish of Saint-Enfant-Jésus de Pointe-aux-Trembles.

He was named professor and student animator at collège l’Assomption, and in the following years at collège Saint-Paul and Cégep Bois-de-Boulogne, where he was a member of the foundation team. Licenced in Theology and Education Sciences at l’Université de Montréal, he obtained a doctorate in Spiritual Theology at the Gregorian University of Rome in 1963.

In 1975, Most Reverend Paul Grégoire made him pastor of Saint-Benoit parish, and four years later Episcopal Vicar of the Centre-West area of Montreal.  Called by Pope John Paul II to become Auxiliary Bishop of Montreal, Monseigneur Saint-Antoine was ordained bishop on May 22, 1981 at Mary Queen of the World Cathedral. He represented the bishops at the Catholic committee of the Conseil Supérieur de l’Éducation, at the Office de Catéchèse du Québec, and in various spiritual movements. He was a member of several episcopal committees including the Education committee. In 1990, Msgr. Jean-Claude Turcotte invited him to be director of the Pastoral Office of Personnel and director of the spiritual renewal of priests successively.

In 2006, he became Bishop Emeritus in what is an ongoing retreat at the Cathedral of Montreal.