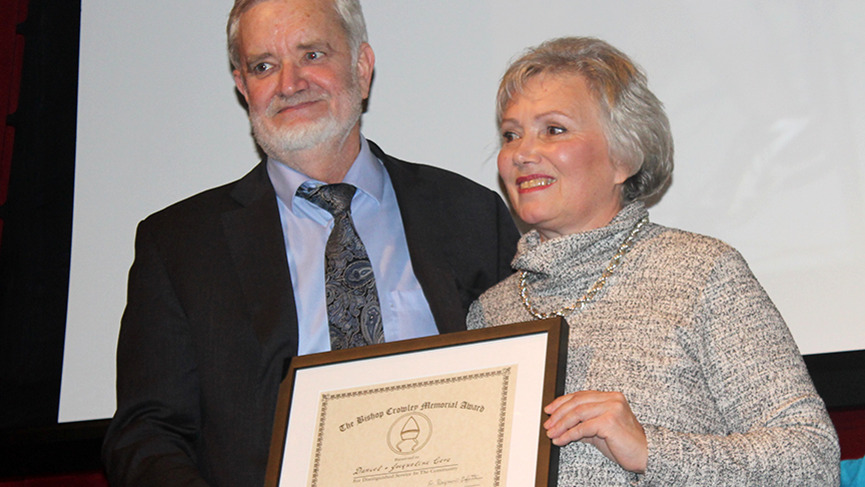 A couple who has tangibly supported family life for two decades are the recipients of the Bishop Crowley Memorial Award.

Jacqueline and Daniel Cere have operated Dominus Vobiscum – Family Retreat Centre since 1998 at Camp Orelda-Marian, situated near St-Gabriel-de-Brandon. The couple spearheaded a group of volunteers – mainly family members and friends – to transform the dilapidated site into a summer retreat centre for families of all sizes and needs.

The retreat centre, which is volunteer-run and volunteer-maintained, today welcomes about 120 families each season.

“Dominus Vobiscum is a calling – a camino – it is not only the walk that we have chosen but it seems that it has chosen us,” Jacqueline said in accepting the award.

Part of the centre’s success is attributed to its strong links to the lay-led Catholic institutions that are part of the English-speaking Catholic community, Daniel underlined. He pointed to the support received from such organizations as the Foundation of Catholic Community Services, which owns the site, and the Newman Centre of McGill, which provides administrative support.

“It was an intrepid group of laypeople who arrived here in 1642 with a vision to build and support lay Catholic life and the faith,” Daniel noted, “that sense of mission needs to continue to animate us.”

The Ceres have six children and eight grandchildren. Daniel is a McGill professor with the Religious Studies Department, and Jacqueline is a spiritual director with the Ignatian Spirituality Centre and Montreal Directed Retreats.

The Ceres are the 33rd recipients of the award, which is presented by the English Speaking Catholic Council. The presentation was part of the community rally, which the council had organized in conjunction with the Nov. 16-17 Parish Vitality Conference. About 350 attended the rally and keynote address of the conference, which was held at Loyola High School. The award is named for the late Bishop Leonard J. Crowley, the third English-language auxiliary bishop of Montreal who prompted and supported the establishment of many lay-led Catholic organizations to serve the community.

Pilgrims prepare for the upcoming WYD in Panama