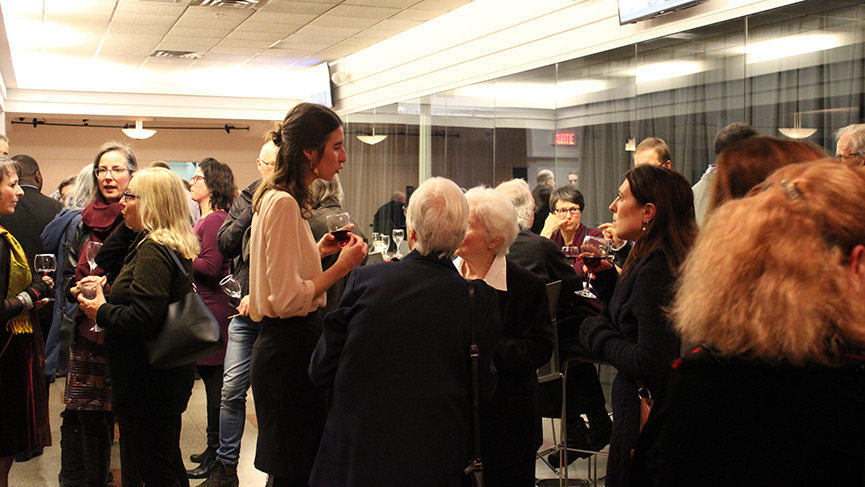 For three decades, the Fondation canadienne de la vidéo religieuse (FCVR) has supported media projects that explore topics touching on the search for the meaning of life, and on human and spiritual values. The Church of the Gesù in Montreal hosted an evening event to celebrate the FCVR’s 30th anniversary. Close to 100 people were in attendance.

More than 680 Canadian radio, movie and internet projects have received 3.8 M$ in support over the span of 30 years. “Many people have given their time and energy. We are heading towards 40 and 50 years! I thank God for this wonderful work, which consists in witnessing to the life of our faith,” said the Most Rev. Christian Rodembourg, Bishop of Saint-Hyacinthe and President of FCVR.

Created by the Canadian Conference of Catholic Bishops (CCCB), the FCVR can count on the support of seasoned and new members on its board of directors: aside from Christian Rodembourg, there is Lucie Martineau, Martin Bilodeau, Sr. Lorraine Caza, Francis Denis, Éliane Thibault and Lisa Gall. FCVR Coordinator and employee Chantal Gagnon is also always there to give a hand.

The FCVR has seen particular highlights over the year: putting aside the 30-year anniversary, the foundation welcomed a new president in 2018, Bishop Rodembourg, successor of Bishop Maurice Couture who passed away in January of 2018. Bishop Lucien Labelle (1919-2019), who founded the organization, left this world on January 31, 2019.

The FCVR recruited a great addition in the person of Bishop Rodembourg, who was an editor in Paris. “I find communications to be important. (…) There is a solid fund. The equivalent of $100,000 is given each year to projects, but it deserves to be supported and increased,” he mentioned in an interview.

In the 1980s, the wind of change blew to make communications a pastoral tool.

“It could be seen in the documents published after Vatican II (1962). Talks about using means of communication to reach people were going on. In those days, we related on audiovisual, slide shows and commentary videos. Today, we explore the Web. We have transited from means aimed at teaching to means aimed at questioning”, said FCVR Vice-President of the Board Lucie Martineau in an interview.

A Story with Meaning

Filmmaker Annabel Loyola’s videos “La ville d’un rêve” and “Les âmes errantes” were amongst the first projects supported by the FCVR in 2018. During the evening, there was a preview screening of the short film “Les âmes errantes”, which will be broadcasted in the spring of 2020.

“It is an honour and a privilege to receive the help of the foundation, so that I can give birth to documentaries. (…) The Hôtel-Dieu de Montréal is the only institution dating back to the foundation of the city of Montreal. It stopped being a hospital on Nov. 5, 2017. Only a small portion of it is still in operation until the CHUM project is completed. The future of the Hôtel-Dieu is not yet determined, though some rehabilitation projects have been submitted. I was shocked when I saw that this institution had been abandoned. This is why I wanted to do a documentary”, said Mrs. Loyola, who is currently creating a trilogy on the subject.

Annabel Loyola’s documentaries and other FCVR-supported projects are meant to aim at the heart of the world and of God, and to raise social issues with love and tenderness.

Christ is King!
30th Anniversary of the École Polytechnique Massacre