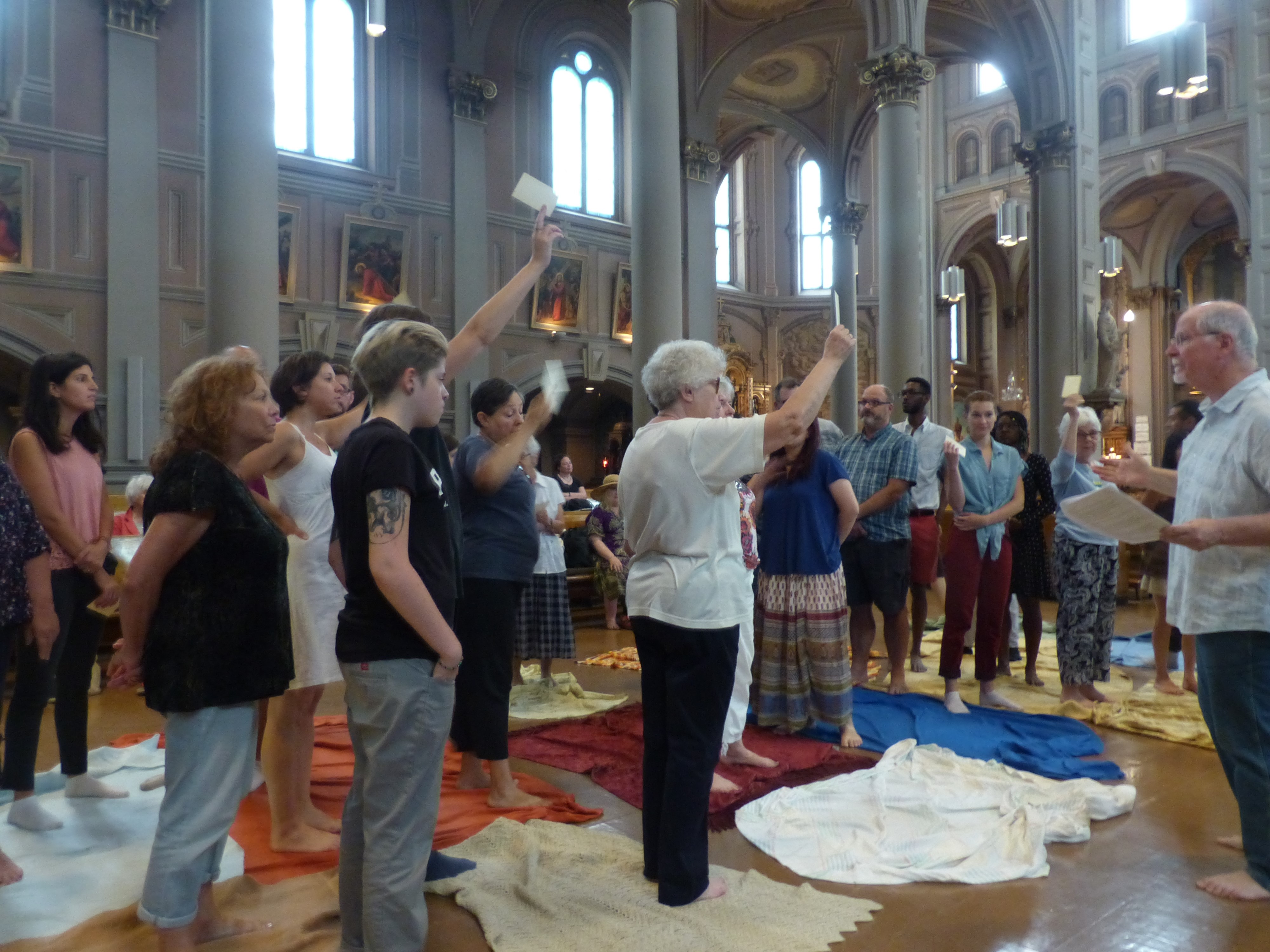 The Mass ended with Brian McDonough and a team from the Social Action Ministry Office directing the Blanket Exercise, an ecumenical event to create awareness about colonial history and the reality faced by aboriginal peoples in Canada and Quebec.

On Sunday, August 11, on the initiative of Roger Twance, an Ojibway, and Fr. John Meehan, s.j., rector of the Church of the Gesù, an aboriginal Mass was celebrated by some 140 people with the participation of Tom Dearhouse, of the First Nations Kanien’kehá :ka (‘Mohawk’) and Ojibway peoples, and Kennett Wallace, of the Choctaw people.

Roger Twance introduced the celebration by stressing the value of silence and the importance of listening with the heart, and to heartbeats symbolized by the drum. The assembly joined in wholeheartedly.

Fr. Meehan presided and delivered the homily, in both French and English. He commented on Scripture reminding the assembly about the importance of their ancestors, their faith, and the sense of responsibility we have one toward another and toward the Earth. Fr. Erik Olan, Provincial of the New Jesuit Province of Canada, concelebrated. Women religious from several congregations participated. Fr. Meehan paid tribute to one of them, Marie-Laure Simon, c.n.d., for supporting the visibility of aboriginal cultures and indigenous spiritualities, and bringing about reconciliation between peoples, particularly as the director of the Wampum Centre for 25 years.

This Mass was intended as a contribution to the Montreal First Peoples’ Festival and to the International Year of Indigenous Languages. Louise Royer, director of the Social Action Ministry Office at the Diocese of Montreal said: “I am happy that Tom Dearhouse sang and opened the celebration in the kanien’kehá language, speaking the words of praise and thanksgiving normally said first. The Mass was celebrated in thirty languages or so in Montreal, and it is about time for local aboriginal cultural expressions to find a place under the sun. Thank you to Roger Twance for daring to propose that it be held and for organizing it.”

The crowd gathered in the church seemed to enjoy: the lengthy time of prayer proves it – something unforeseen even by the organizers – and people were invited to come forward to burn sage as an offering. The comments posted on the Facebook page report on the beauty and the profound meaning of this celebration; several people hope that there will be a next one.

The Mass ended with Brian McDonough and a team from the Social Action Ministry Office directing the Blanket Exercise, an ecumenical event to create awareness about colonial history and the reality faced by aboriginal peoples in Canada and Quebec. Some forty people took part of it.

The Catholic Church counts, among its faithful, people of all origins including Aboriginals. Its institutions – the Society of Jesus being one of them – have been supporting the life of First Nations ever since the first encounters with Europeans.

Global migration: its impacts on peace, justice and stability in the world
Sick and vulnerable people must be shown the most profound respect

Sick and vulnerable people must be shown the most profound respect