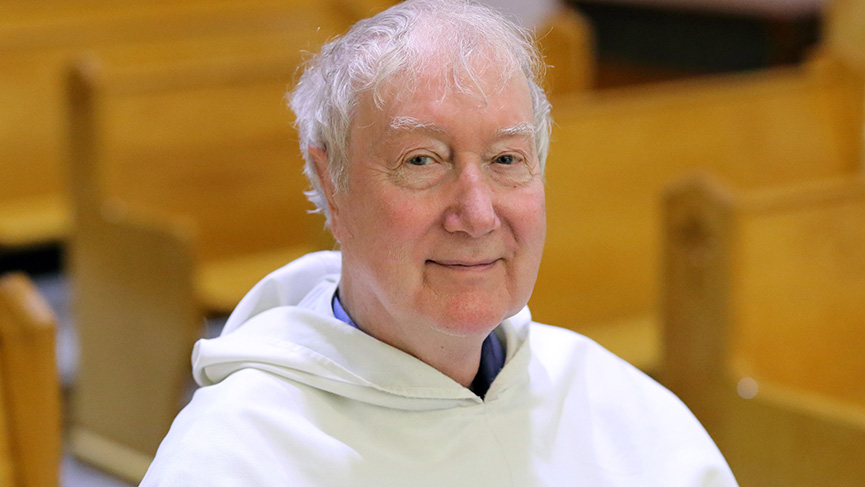 The Catholic Church should not be afraid of crisis; through crisis, it will grow and spring new life, said Dominican Father Timothy Radcliffe.

"If you look at human beings, we grow up through crisis," said the 73-year-old English theologian. "It's our way. And so we believe, I believe, it's the fate of the church ... we do not have to be afraid of crisis."

The former head of the Order of Preachers spoke about hope at conferences in Montreal and Quebec City in mid-February.
He cited the sex abuse crisis, but also the crisis of authority, as Pope Francis has had to face much opposition within the church. In addressing these issues, Father Radcliffe pointed toward the "biggest crisis," the Last Supper.

The apostles "had abandoned Jesus. Judas had sold him. Peter was about to betray him. There was no future. And then in that darkest moment, Jesus did this extraordinary thing. He said, 'This is my body, and I give it to you.' So, I think that when there are moments of crisis in the church, we should not be afraid. We should ask what new thing will come to be," Father Radcliffe said.

In the ongoing debate about how the church should deal with the situation, some observers note that groups tend to challenge the authority of the bishops.

The challenge, he said, is to find a way to evolve toward a riche sense of a more diverse authority. And he stressed this point: "The biggest problem the church has at the moment is how we talk to each other. How do laity and the clergy talk. Left and right. Scholars and people who aren't scholars. And this is the new model of the church we need. It's one where we are able to have conversations that transcend barriers. Whether of left or right, young or old, or whatever. But that requires patience and intelligence. And we're not always showing it at the moment."

He questioned how conversations thrive in today's Western societies, noting that the development of social media strongly encourages dialogue with people you already agree with.

"And so, our society fears difference. And this is being reflected in the church, by the way either the left or the right are dismissive," he said. "Because society discourages profound conversation. Look at President Trump. Look at tweets. A world run by slogans. It's pathetic, isn't it?"

Father Radcliffe quoted British philosopher Iris Murdoch, who pointed out that to better understand somebody, one must look at what they fear. Father Radcliffe said he sees many fears gripping people in the church.

"And a lot of people blame Pope Francis," he added.

The theologian said Pope Benedict XVI was a very clear theologian. "And walking with Benedict was a bit like walking in the daytime. But if you're going to travel, you can't only travel in the day. You have to travel at night, too. That means that sometimes, things will not be clear. Because, we are trying to arrive at a new clarity. And this is the genius of Pope Francis: he's leading us into unknown territory."

The sex abuse crisis is thrusting the church into uncharted waters. Though the Feb. 21-24 summit on child protection at the Vatican is a step in the right direction, more efforts will be needed. And the question remains: What church will come out of this crisis?

Saying "sorry" and offering financial compensation is not enough, he continued.

"We have somehow to put them at the center of the church. As people we will honor, respect. They are our brothers and sisters."

“Protection of Minors” meeting: Four days designed to leave their mark
The courage to name the evil behind abuse

The courage to name the evil behind abuse