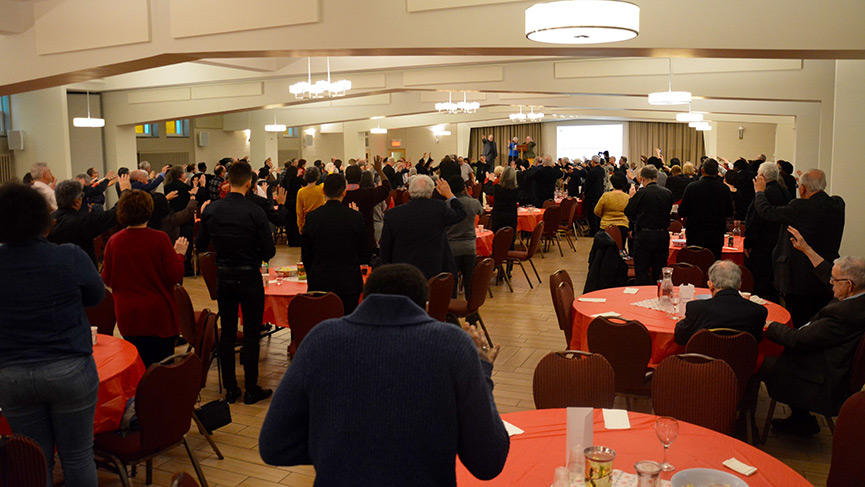 After the holiday bustle, three gatherings for those involved in pastoral teams across the diocese were hosted by the Archdiocese of Montreal to celebrate not only the joy of the birth of Christ but also the Epiphany, the feast highlighting the adoration of Jesus by the Magi.

More than 200 people from all over the diocese gathered in the basement of Sainte-Sixte Church, on Saturday, Jan. 11, 2020, to share a meal and most importantly a time of solidarity to celebrate the feast of the Epiphany. Before the good meal was served, the assembly took the time to pray, to read the Word of God and to present prayer intentions.

On this occasion, eight people received the Bishop Ignace Bourget Diocesan Medal of Merit, a price in recognition for their services. As indicated in the description, the diocesan recognition underlines these individuals’ pastoral creativity, and contributions and implication in their community over the last 40 years.

The Medal of Merit was granted to:

Blessings for the Archbishop

As per tradition, the Archbishop gave his blessings to the whole assembly, but first, he received the blessings of the assembly through the voice of Sr. Maura McGrathe, CND, the founder of the Refuge Juan Moreno for immigrants, and of Charles Taker, a man highly active in many charities.

“I wish in the name of the entire Catholic community to express my profound gratitude toward you, Archbishop, for your leadership, for your shepherd’s heart and especially for the way you listen to people,” said Sr. Maura. She gave thanks to God for three calls she felt were really important for the Archbishop, one being the call to unity from all the communities in the diocese of Montreal; the call of the cries of the refugees, underlining especially the work of the organization Le Pont; and the call for the Church of North America toward complete ecological sustainability, as an answer to the cries of “Mother Earth.”

Charles Taker asked afterwards the assembly to stand up and to bless the archbishop, as he recalled the traditional family blessing given on New Year’s Day.

“We are going through demanding times, yet they are filled with grace. These are times to finally get closer to God,” he said. It is in that perspective that Archbishop Lépine invited each of us to (re)discover the “power of adoration”: “Because faith is there to bring its light […] in all facets of our lives.”